Steam now highlights subtitles and languages for games in store

If you want to play your games in a certain language, you need to make sure that you are buying the right version, or that the game is supporting the language at all that you want to play it in. I'm for instance still annoyed by Sega as the company did not produce translated versions of Shining Force 3 Episode 2 and 3 (the game was only released in Japanese).

Most stores do not display which languages a single game copy supports out of the box, and while it is sometimes possible to pick a specific language-version of a game, you more often than not have to research the matter before you make a buying decision.

Steam rolled out an update today that improves this significantly for games offered on the platform. When you open a game's page on Steam now, and it does not matter if you use the official website in a browser of choice or the Steam client directly, you will find that Valve has added language information to the sidebar. 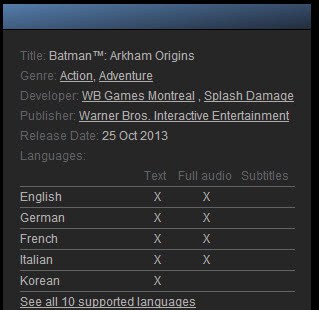 You can check out a game like Team Fortress 2 on Steam to see how this looks like. The information are available for most but not for all games that are currently offered on Steam. It is not clear at this point in time if the information are still added to the database, or if language related information won't be provided for some games.

Skyrim's Legendary Edition does not display the information yet for instance.

So who is going to benefit from this new feature? First users who want to play games in a foreign language. I prefer to play my games in English for example while others may prefer a different language, for instance to learn it or because they simply prefer it over their own.

Subtitle information can be useful for the hearing impaired and those who do not speak a language that they play the game in fluently.

Subtitles can also be useful if full audio is only available in a language that gamers do not understand at all, for instance in cutscenes.

The added language information on Steam may look like a small thing to many, but they help those who research the supported languages of a game before they make a buying decision.

Previous Post: « The impact that the shutdown of Games for Windows Live has on games that use it
Next Post: Why you may have received a Steam Trade Ban, and how to enable trading again »