Google popularized the "New Tab page" with its Chrome web browser, a feature that Firefox has also adopted. The Chrome version has many cool features, such as your most viewed web pages, a Google search box, access to the Chrome store, apps and the ability to customize the background from an array of images provided in the store. Customers can even use their own images to create a theme, though this requires an app called My Chrome Theme.

Now Google is rolling out changes to this page, and users are beginning to see a pop-up message when visiting the page. The message attempts to explain the changes.

First up is the Google search box, which displays the traditional Google logo above it. This will now show the Google Doodle above the box -- providing there happens to be one, which is far from everyday. Its a minor change, but for those who do not actually visit the Google.com page often, it will ensure that we don't miss the Doodle. It is a feature the company brought to Google Now already.

Next up, the search giant has removed access to apps from this page, but you can now access them from anywhere, as the feature has been moved to the bookmarks bar at the top of the screen. You will find the option at the far left side. Alternatively, you can always simply type chrome://apps into the omnibar as well. 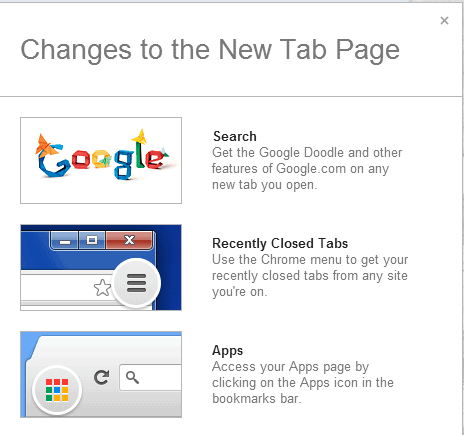 Finally, Recently closed tabs, which could always be accessed by right-clicking a current tab (and still can be), but only provides the most recently closed tab, meaning that a tab closed five pages ago requires repeating the process five times. Now Google has added the feature to the options menu, under Recent Tabs, which displays a number of your most recent pages.

The new page seems mostly designed to make things more confusing, as opposed to keeping everything in one simple location. On the whole, I am finding it to be less user friendly, though the Doodle is a nice touch, as is the access to numerous closed tabs -- though this can be accessed from anywhere. The Chrome Store, also is not as easily accessed. Like anything though, it will just take some getting used to.