When I look at the contacts database of my Android phone I notice that it uses several different number formats when it comes to the telephone number. Some numbers include the country code for example while others do not, and some use a slash to separate the area code while others do not.

That's not a big issue considering that Android seems to support multiple different formats without any issues, but if you prefer an ordered list instead, you may want to check out Twitch! Contacts Formatter for the Android operating system.

The application provides you with single-click options to standardize the phone number format of some or all contacts that are currently listed in the phone's contact database. The application displays all current contacts in list form on start. Here you see the name and phone number at first. A click on hide and the selection of show adds the country to the table.

The application checks all valid numbers that can be standardized are selected by default so that you only have to go through the list to make sure that everything is in order before you hit the save button so that all selected phone numbers use the same format from that moment on. 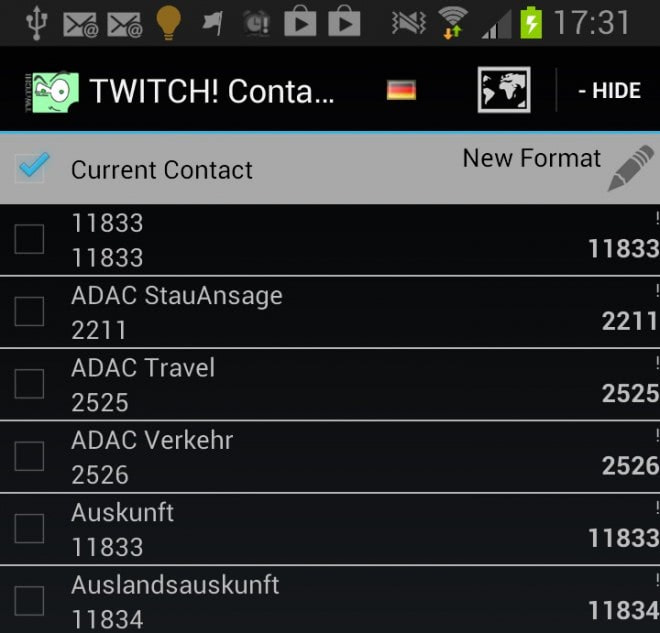 Invalid numbers are highlighted with a (!) symbol next to their phone number. All shortcode numbers that may have been added automatically by your mobile phone provider fall into that category for instance. It is probably best to ignore those.

The program detects the country based on the country code of the SIM card. It is possible to change that country, which may be useful if you are living abroad but want to use a different format for local numbers.

Martin Brinkmann is a journalist from Germany who founded Ghacks Technology News Back in 2005. He is passionate about all things tech and knows the Internet and computers like the back of his hand. You can follow Martin on Facebook or Twitter
View all posts by Martin Brinkmann →
Previous Post: « Swype improves your typing speed on Android devices
Next Post: Shuffle My Life for Android gives you tasks that may improve your life »