To avoid confusion right from the beginning: This is not a review of the mainstream title Prototype 2 that got released some time ago, it is a review of the shoot em up Prototype 2. The game is a free to play arcade shooter in the tradition of R-Type. All you need to do to get started is download and unpack the 50 Megabyte file to your computer and launch it from there. You are presented with a configuration menu on start that you can use to change the game's resolution and other graphic effects.

You may also want to pay a visit to the controls section after the game starts and the intro is over (or you pressed Z to skip past it). A primary (keyboard) and secondary (joystick) configuration is available and if you do not like the default setup (arrow keys to move, Z to fire, X to manipulate, C to detonate and S or A to speed up or down) you can change them here.

Unlike in R-Type, you can customize your ship before you start the game. Not only can you select a different ship layout that is providing you with a different set of weaponry and extras, you also get to select missile types and the type of the orbpod and gunpod. 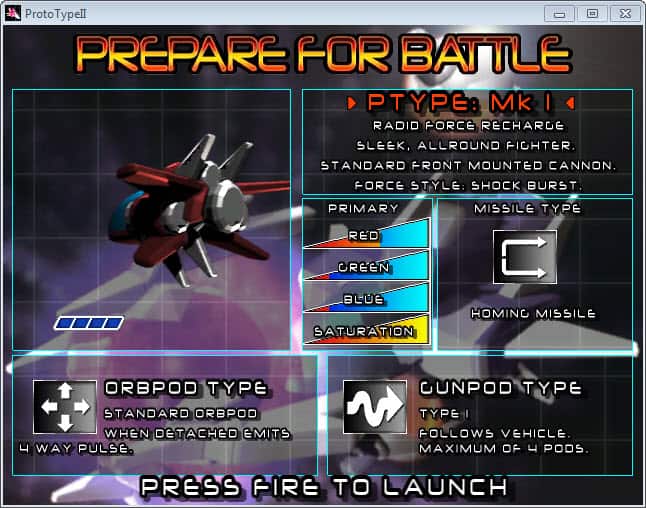 Once you have made your selection here you can press fire to start the game. The game itself plays a lot like R-Type. You get your pod early on that is automatically attached to the ship's front protecting it from incoming missiles from that direction. It also adds firepower to your ship, and if things get out of hand, can be detonated in a smart bomb like move that destroys all smaller vessels and bullets that fly around on the screen.

You can detach the orb from the ship just like you could in R-Type. That's useful in certain circumstances, for instance in boss fights or in situations where extra fire power is needed elsewhere. Boss fights in the game demand your full attention. Each boss has its own attacks and requires a different strategy to beat. 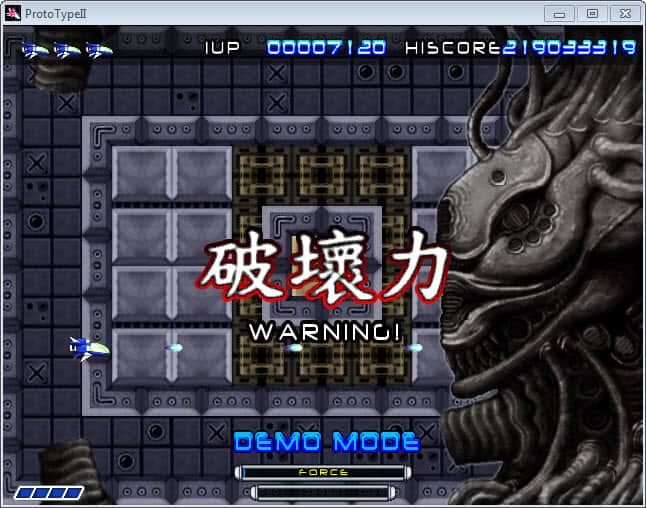 The game is quite difficult even if you pick the novice difficulty level. Your maneuverability is limited by level design, the enemy ships and vehicles and bullets that fly your way constantly. It takes  some getting used to time since it resembles games of the golden age of gaming, that is the 16-bit era, and not modern games that try to make it super easy for the player.

The first thing you need to master is the orb, and how you can detach it from your ship and attach it again to a different position as it can make life a lot easier during game play.You detach the orb with X and can connect it again to the front or rear when you move close to it again.

If you enjoyed R-Type like games in the past or shoot em ups in general then this is a game that you should download and play. While it can be frustrating at times, like the original R-Type games, it is also very rewarding when you first make it past a difficult part of a level or boss fight for the first time.