Microsoft decided to ship Windows 8 without a start menu and the main reason for that was probably to get users to use the start screen of the operating system even though Microsoft claimed it was based on telemetry data it collected. While it is certainly possible to use Windows 8 that way after some getting used to time, it is a huge change for veteran users who worked with the start menu their entire computing life.

Companies like Stardock and Sweetlabs and open source projects like Classic Shell jumped in and made their own start menu programs available for Windows 8.  All have in common that they add the start button back to the desktop interface of Windows 8 and Windows 8 Pro. A click on the button displays a menu that looks almost identical to the start menu of the Windows 7 operating system.

Stardock recently announced that downloads of Start8, the company's start menu replacement for Microsoft's newest operating system crossed the 3 million mark and while that does not equal installations, it is likely that the majority of users who downloaded the program have also installed it on their system.

If we take Microsoft's 60 million licenses sold up to date announcement it could very well mean that about 5% of all Windows 8 users are using Stardock's start menu replacement. 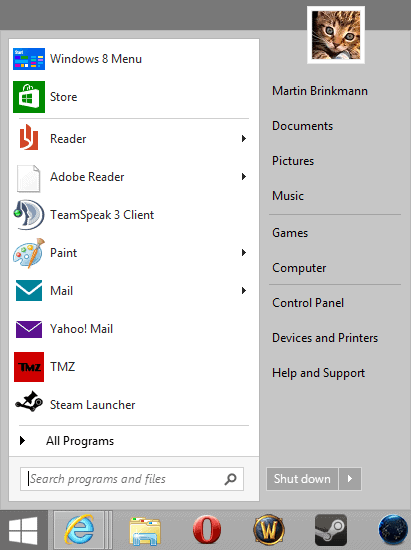 Start8 is on the other hand just one of the start menu replacements. Sweetlab's Pokki adds another 1.5 million start menu downloads to the equation. Then there is Classic Shell which has seen a big jump in downloads at the same time the first preview releases of Windows 8 were released to the public. The program has been downloaded more than 700,000 times in December 2012 alone and more than 1.8 million times since the release of Windows 8 in October 2012.

It highlights that a sizable part of Windows 8's user base misses the start menu that much that it purchased (in the case of Start8), download and installed start menu programs on Windows 8.

Will it be enough to convince Microsoft to add a start menu back to Windows 8 or the successor of the operating system? It is highly doubtful that this is going to happen unless Windows 8 will flop big time in the coming year.

Martin Brinkmann is a journalist from Germany who founded Ghacks Technology News Back in 2005. He is passionate about all things tech and knows the Internet and computers like the back of his hand. You can follow Martin on Facebook or Twitter
View all posts by Martin Brinkmann →
Previous Post: « How to enable transparency on Windows 8
Next Post: Acronis promising fix for Windows 8 bug »