Dota2 is a remake of the classic Defense of the Ancient Warcraft 3 mod which is currently available as a beta version on Steam. The beta is not free at the time of writing unless you happen to get a beta code, if you do not, you can get access to it immediately for about €30. The price includes a couple of items that change the appearance of certain heroes in the game. It is important to note that the game itself will be released as a free to play game. While it is not clear if and how free users will be limited, it is likely that Valve Software will introduce a concept similar to its highly popular franchise Team Fortress 2 which is also free to play but limits players in regards to the size of their backpack and a number of other features that do not put them at a disadvantage in the game.

I have been playing Dota 2 for the last two weeks and it is definitely a fun game with a long learning curve. While it is fairly easy to understand the basic concept of the game, it is quite difficult to understand how to level the heroes, what items you need and how to best approach the game strategically.

But the variety of the game is also one of its greatest strengths. You get access to nearly one hundred different heroes which all have their own special abilities and play styles. You can get better by playing the game, reading guides on sites such as Dota Fire or watching live streams.

The Google Chrome extension Dota 2 Stream Browser makes those available right in the Internet browser. All you need to do is install the extension in Chrome and click on the button that it adds to the browser's toolbar afterwards. Here you get a listing of active streams and their count of viewers. 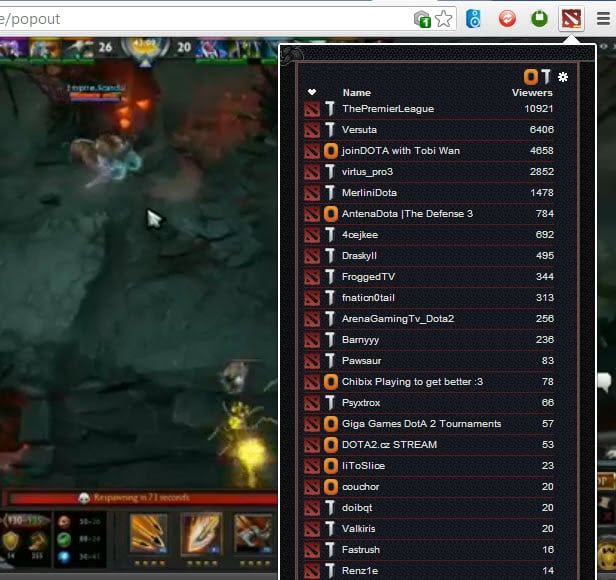 A click opens the stream in a new browser tab so that you can start watching it right away. An icon next to the Stream's name indicates where it is hosted. From what I can tell they are mostly hosted on own3d and twitch, at least at the time of writing.

The commentary language is English most of the time but you do get the occasional Russian or German language stream in between. You can modify the quality of the stream and use basic controls like pausing as well. The streams do feature advertisement which you can't skip it seems.

While you could visit the streaming sites in your web browser manually to find Dota2 streams, the extensions makes them directly accessible

Martin Brinkmann is a journalist from Germany who founded Ghacks Technology News Back in 2005. He is passionate about all things tech and knows the Internet and computers like the back of his hand. You can follow Martin on Facebook or Twitter
View all posts by Martin Brinkmann →
Previous Post: « Verminest retro arcade shooter [Game Saturday]
Next Post: Maldita Castilla [Game Saturday] »