by Martin Brinkmann on December 24, 2012 in Google Android - No comments

The makers of Dropbox, the popular file hosting and synchronization service, make available experimental builds for desktop systems and mobile devices regularly that interested users can install on their devices to test and use upcoming features that will eventually land in stable versions of the program.

What this means is that your version of Dropbox will get updated to new experimental builds whenever they are released, so that you do not have to do that manually anymore.

Not every user wants that on the other hand, as experimental builds may have bugs that the team needs to sort out before the new features make it into stable releases of Dropbox. A switch was integrated into the options to disable auto-upgrades to experimental Dropbox builds.

To get there click on the options button of your Android phone and select Settings from the options when the Dropbox app is open. Scroll down until you see Get early releases and tap on it to disable the option. Do the same to enable it at any time in the future again.

This may be useful if you prefer to check what's new in a release before you make a decision to upgrade to it. 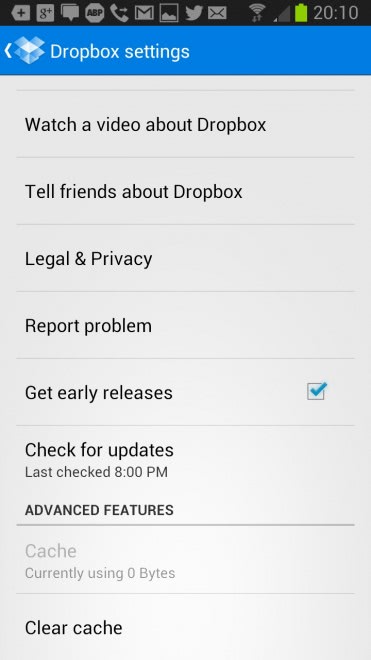 The new auto-upgrade option is the biggest new feature in this release, but the developers have integrated a couple of others as well:

You can download and install the latest Dropbox release from the official forum.