Remember Boxcryptor? The program, available for various operating systems including Windows and Android can encrypt files that you synchronize with online storage solutions like Dropbox, Google Drive, Box and other cloud storage providers on the fly. It is an alternative to encrypting files and folders with encryption software such as True Crypt, especially since it is a lot easier to do so.

You set a password you want your data to be protected with and a source folder that you want to encrypt. The program, as long as it is running, makes sure that your files get encrypted and decrypted on the fly automatically.

The developers of the service recently released version 1.5 for Windows which added support for Microsoft's Windows 8 operating system. Probably more interesting than that is the release of BoxCryptor for the Chrome web browser. The extension is available as an alpha version that gives you access to encrypted files on Dropbox or Google drive right from within the web browser.

Why would you want that? Because it means that you can access your protected files even if BoxCryptor is not installed on the PC you are currently working on. Just install the extension and visit the Dropbox or Google Drive website afterwards. You will find an option at the top to create a new BoxCryptor folder on the website of either service. 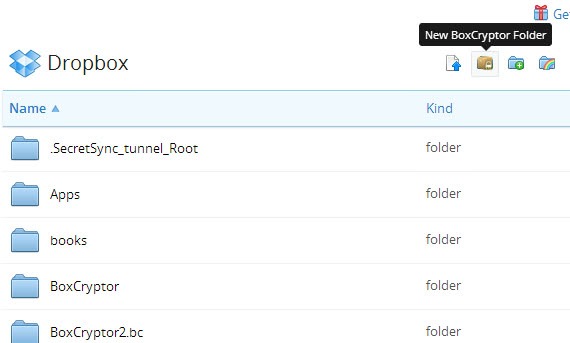 All you have to do is select a password to protect the folder from unauthorized access. Any file that you upload to the folder will be encrypted by the plugin automatically. To access the folder contents, you simply have to enter the authorization password on first access. This decrypts all contents of the folder so that they are accessible just like any other file on Dropbox or Google Drive.

Please note that you can access new and existing folders that you have encrypted with BoxCrypt. You can access any BoxCrypt encrypted folder on Dropbox or Google Drive using the plugin.

Another benefit of the browser plugin is that it is now easier to access previous versions of files that host in the cloud.

Here is a video demonstration of the feature:

You theoretically do not need to install BoxCryptor at all to use it, as long as you have access to Google Chrome on the system you are working on.

Remember that this is alpha software, and while I have not run into any issues during my tests, I'd suggest you backup files that you encrypt with the software just to be on the safe side of things.

Martin Brinkmann is a journalist from Germany who founded Ghacks Technology News Back in 2005. He is passionate about all things tech and knows the Internet and computers like the back of his hand. You can follow Martin on Facebook or Twitter
View all posts by Martin Brinkmann →
Previous Post: « Save Internet files directly to Google Drive
Next Post: Chrome's New Tab page puts focus on Google Search »