Windows Media Player is the default video and audio player that is integrated with every version of Windows. The player has been crippled a bit in Windows 8 as it does not support video DVDs out of the box. You can download the Media Center Pack for free until January 31, 2013 to add DVD playback support to Windows Media Center, but only if you are running Windows 8 Pro.

Windows Media Player is limited in terms of video and audio formats it can play, and many Windows users install a codec pack to add support for missing formats to it. I'm not a fan of codec packs as you usually end up installing more than you need to play the formats that are not supported.

When you try to play mkv files in Windows Media Player you will get the following notification:

The selected file has an extension (.mkv) that is not recognized by Windows Media Player, but the Player may still be able to play it. Because the extension is unknown by the Player, you should be sure that the file comes from a trustworthy source.

When you select Yes, you get an error message that states:

Windows Media Player encountered a problem while playing the file.

One of the easiest options is to switch to a media player supporting the formats. This is for instance the case for VLC Media Player or SMPlayer.

If you are hellbent to use Windows Media Player to play multimedia files on your system, you may be interested in the following solution that does not install a codec pack on your Windows 8 system. 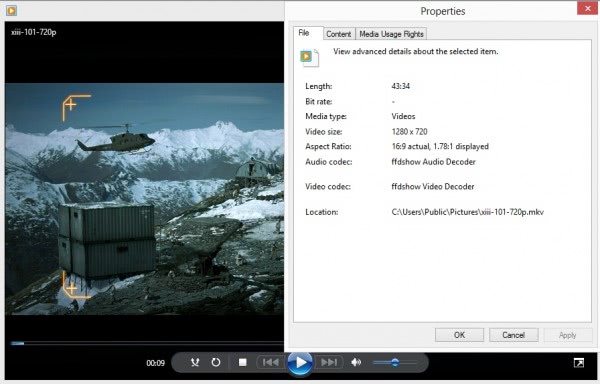 All that you need is a program called Haali Media Splitter which adds support for various containers to Windows 8.

How to customize the settings in mpv

VLC 2.5 for Android is a major update

Exclusive streaming deals show that studios have not learned a thing

Could Netflix switch to P2P to lower ISP pressure?