Reasons why you do not want Windows 8

After giving you ten reasons why you should upgrade to Windows 8, it is now time to give you reasons why you may not want to upgrade to Windows 8.Â  This is not a top ten list, and it does not have to be one as you do not need ten or more reasons not to switch. If there is one thing that is bothering you or keeping you from upgrading, it is sufficient. When you look around on various sites and read the comments, you will notice that you can reduce the core arguments against Windows 8 to four or maybe five different points.

Without doubt the number one reason not to upgrade to Windows 8. The split user interface, and the enforcement of it by Microsoft, changes how you work with the operating system. Microsoft wants you to boot into the start page, and the main reason that I think it wants that is to push Windows Store as it add a new revenue model for the company. It is like Blizzard not only integrating an auction house in Diablo 3, but creating the whole game around it to make lots of money from transactions from users who bought the game.

The user interface displays a list of tiles, some static, some dynamic, when you load it. These tiles load apps that always run in full screen. If you have a large enough monitor, you can snap apps on the left or right side to use one third of the space, so that another takes the remaining two thirds. There is no way to display more than two apps at the same time on the screen, even if you have a 30" monitor. The majority of default apps that ship with the operating system are basic apps. The mail app for instance does not let you change the layout of how mails are displayed. 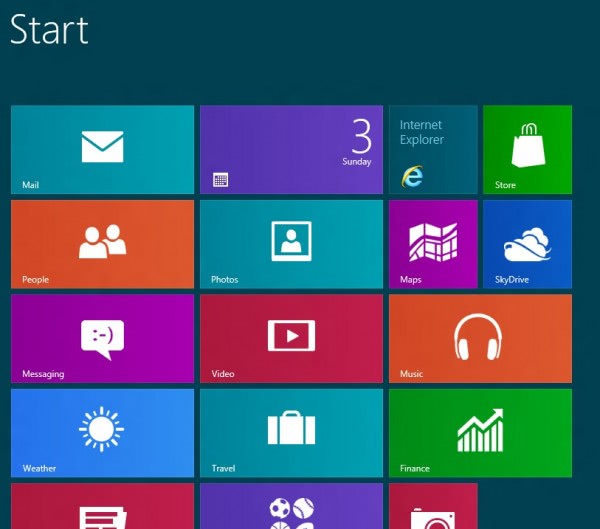 The interface is also criticized for being touch centric. This may be great for mobile devices that support touch - of which there are not really that many available in the Windows world yet - but not so great for desktop users. The Charms bar for instance is displayed when you move the mouse to the lower right or upper right corner of the screen, or when you press Windows-C. Here you then navigate through a series of menus, for instance to open the control panel or shut down the computer. And while you get shortcuts for some of the activities here, you do not for others.

And those menus are also used on the desktop. Microsoft has done away with the start menu, which has been one of the core features of previous versions of Windows. The start menu linked to the control panel, installed programs, search and various other system tools. Part of its functionality has been moved to the Charms Bar. The search on the other hand redirects you to the start page interface where you can start typing right away. The issue here is that switching interfaces during search is something that you need to get used to. It is not that bad once you do, but an option to search right from the desktop would have been appreciated by many users.

If you want to use all of the operating system's functionality, you need to sign in with a free Microsoft account to do so. If you do, you get features such as the syncing of preferences with the cloud, easier password recovery options and access to the Windows Store. The account is not needed, and you can run Windows 8 using a local account if you want to, but that would mean that you can't install any new apps that appear in the store on the system. While you can still install apps that are not offered in the store, you'd lose out on the majority of apps here. 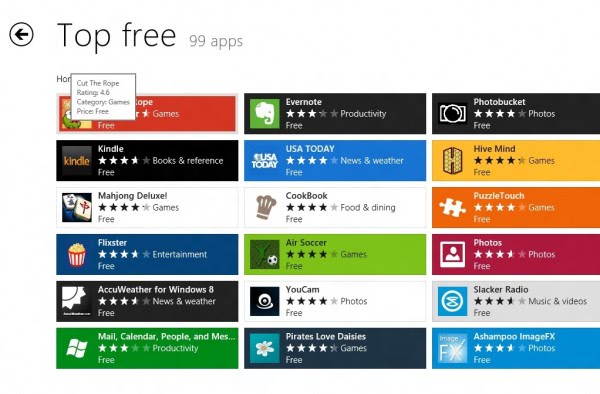 Apps obviously are not really something that desktop workers may be interested in, especially since there are always alternatives available that you can install right away on your system. The store does not offer anything that experienced Windows users can't get as a software program or online service. The store makes available apps in a safe environment though, which regular users may prefer over downloading applications from an Internet site that they may not trust as much as Microsoft.

But the store is a closed system, one that is controlled entirely by Microsoft. It is not different from how Apple or Google run their stores, and you will find that all block certain types of apps from appearing in the store. While that is not that of an issue for Windows 8 users, as they may install desktop applications instead to add the functionality to their systems, it may very well be one for software developers. And what is keeping Microsoft from expanding the store in future versions of Windows to include desktop applications as well?

If your company computer's are largely running on Windows XP, and you know that extended support for the operating system runs out in two years time, would you prefer to upgrade those systems to Windows 7 or Windows 8? The core benefit of upgrading to Windows 7 is that you do not have to spend that many resources in training employees to work with the new operating system. While you get some new features, like the improved taskbar or a start menu that looks slightly different, the Windows 7 operating system itself is nearly identical in what's where and how things are working to Windows XP.

Compare that to Windows 8 and you will have to train employees to work with the new start page, or at least how to get out of it, how to use the Charms Bar, the new search, and how to work without a start menu.

Apps are not really that suitable for business environments as they run fullscreen all the time. And while you can display two next to each other on one screen, or use a multi-monitor setup to display both the start page and the desktop, it is not really something that adds value to day to day operations for most companies. To make matters worse, there is no official way of bypassing the start page altogether. Instead of relying on the Group Policy to bypass the start page, you either have to use one of the available hacks to do so, or do not bypass the start page at all.

With Windows 7 still on the market when Windows 8 launches, it is likely that many companies and users who know about Windows 8 will select the former operating system to upgrade existing PCs. One should not forget that Windows 8 is a risk for Microsoft. If the operating system does not sell as well as hoped, the company might be inclined to return to the pre-Windows 8 ways with Windows 9 to get back on track.

Previous Post: « Ten reasons why you should upgrade to Windows 8
Next Post: « Skip Metro Suite is your all in one getting-rid of Windows 8 Metro solution