Visa, Mastercard Credit Card Information Hacked? What you should do now

Two days ago a hacker going by the name Reckz0r claimed to have gained over 50 Gigabyte worth of data from 79 banking companies that he hacked over the course of the past three months. The data is said to contain extensive information, including customer Visa and Mastercard credit card data.

To proof that this is not just a pipe dream, the hacker posted an excerpt of the data on Pastebin listing a couple hundred Visa and Mastercard customers. Data includes full names, addresses, phone numbers and email addresses, but not the actual credit card number, verification code and expiry date.

It needs to be noted that some users on Twitter have refuted the claim by pointing out that the dump posted on Pastebin also appeared on another hacking related site where the information were posted two weeks ago. This does not necessarily mean that the claims are false though, considering that Reckz0r claims to have spend the last three months hacking the sites. 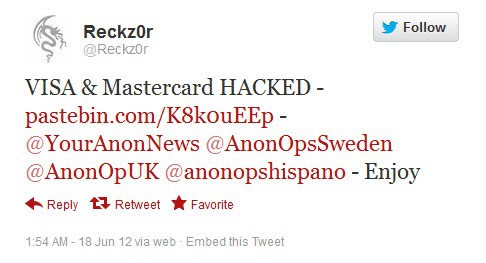 Regardless of that, there are things that Visa and Mastercard owners should do to make sure that no one else is using their credit card information for payments.

Probably the most important step is to monitor the credit card bill regularly to make sure that no one unauthorized has used the card to make purchases. Most banks and companies offer telephone support for that, so that you can check the support right away to make sure everything is alright.

You should also monitor your bank statements, if your credit card is linked to an account - which it normally is - to make sure nothing slips by you this way.

If you notice irregularities, contact your bank right away and let them know about it. While I cannot speak for all banks, money is usually transferred back to the account when disputes are opened up.

There is unfortunately not a lot that you can do besides monitoring your statements. While you could ask the bank to replace the card, it would probably mean that you would have to pay for the replacement. I'd personally suggest you wait until more details about the data leak on the Internet. If your name is in the text file though, or in a future leak, you should immediately contact your financial institute so that the card gets terminated and another one issued.