Google to charge for Product Listings in Google Shopping switch

Back in May, Google announced that it would soon switch from the free to list-in Google Product Search to the paid only Google Shopping service. Webmaster are currently notified via email about the transition that Google hopes to complete in the Fall of 2012, with the change coming first to the US, and then later on internationally.

Rankings on Google Shopping are then determined by product relevance to the user's search phrase and the bid price. Merchants in addition can choose to participate in Google's Trusted Stores program which offers a badge for merchants that can be displayed on sites. This badge includes ratings for customer service and on-time shipping among other background information.

Changes are also coming to Google.com, and later on to international Google domains. This includes larger product images on related searches which will only take up space that is currently occupied by Adwords advertisements. Incentives are offered to merchants to create paid product listing ads by August 15. 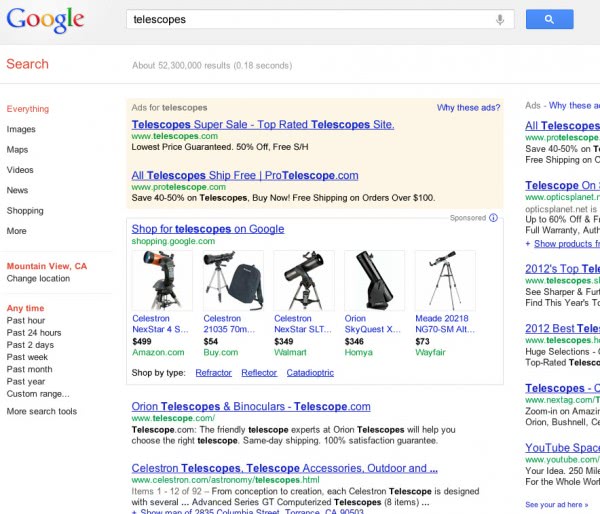 When you look at reactions on webmaster forums like Webmaster World, you will notice that many users there believe that this is just another step towards making Google the all-in-one destination on the Internet. Some put the move in relation to Google search updates, Penguin and Panda, that hurt many smaller e-commerce and affiliate based websites.

Operators of shopping sites who benefited from free clicks until now will certainly feel the heat as the phasing out of free clicks will have an impact on the sites' monthly advertisement budget or the current level of traffic coming from Google Product Search. It is also likely that larger companies can now effectively enter markets where they may have previously been on a level playing field with smaller competitors.

This is very similar to the changes that Google made to its search engine offering. Additional ad units and on-site modules have taken over all premium spots in the search engine results, lowering the exposure of organic sites in the results.

Some users will certainly defend Google for the move, stating that it is the company's right to do as it pleases on its own properties. And to an extend, that is true. Since we are talking about a monopoly of sorts in many countries throughout the world though, it may be seen different though. What's your take on the move?