Back in 2010 several OpenOffice developers decided to leave the OpenOffice development team to create their own fork of the popular open source Office suite. The decision back then was motivated mainly by Oracle's purchase of Sun Microsystems and concerns that Oracle would either close down the project completely or try to monetize it.

LibreOffice since then had three major and several minor releases of which version 3.5 is the most noteworthy as it offered new features and improvements. A few days ago LibreOffice was updated to version 3.5.4 which, according to the developers of the Office suite, improves the document opening performance of the program by up to 100%. While results may vary depending on the size and contents of the document, the hardware and the configuration of LibreOffice, initial reports suggest that the majority of users see a speed increase when opening documents. 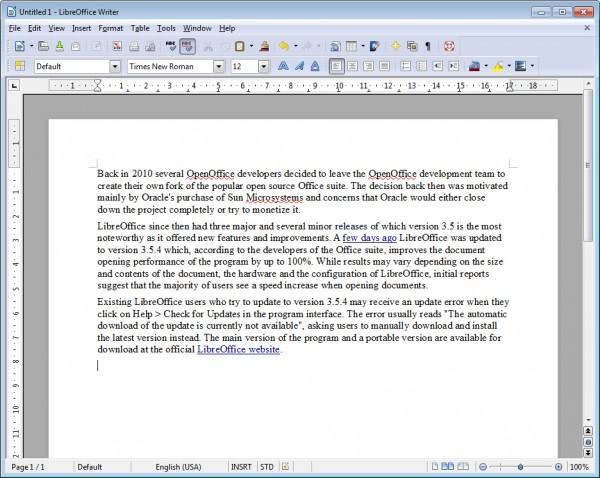 Additional performance improvements and bug fixes have found their way into the update which improve the program's speed and stability further.

Existing LibreOffice users who try to update to version 3.5.4 may receive an update error when they click on Help > Check for Updates in the program interface. The error usually reads "The automatic download of the update is currently not available", asking users to manually download and install the latest version instead. The main version of the program and a portable version are available for download at the official LibreOffice website.

It is interesting to note that there seems to be a rift between OpenOffice and LibreOffice, and the operating systems the programs are most popular on. OpenOffice for instance appears to be favored by Windows users, while Linux users predominantly seem to favor LibreOffice. Comparing download statistics on the other hand may not be the best option to compare popularity, as Linux users have other options of downloading than to download applications from their project websites.

Which leads to the closing question: are you favoring LibreOffice or OpenOffice, or using a completely different program for all your document editing, viewing and management needs?

Previous Post: « How to Skip Metro and go right to the Windows 8 Desktop
Next Post: « Windows Security Emergency Patch to fix Flame loophole