I remember the original Gemcraft Flash game, and that I have played it a lot back in the days when it first came out. Gemcraft Labyrinth has been out for a long time, but it is still a great game, especially if you like the tower defense genre of games.

If you have played a Gemcraft game before, you will immediately discover similarities between Labyrinth and other gemcraft games. The basics can be explained quite easily. Your task is to protect your orb from enemies that try to reach it. And to do that, you build defenses around that orb.

In Gemcraft Labyrinth, you can build tower slots everywhere, provided that they do not block the enemies entirely, and that you have the mana necessary to build them. Mana is the only resource in the game, and it is used to build towers and other stuff, create gems, and also used as your orbs life. When your mana reaches zero or less, it is game over and you have to replay the level. 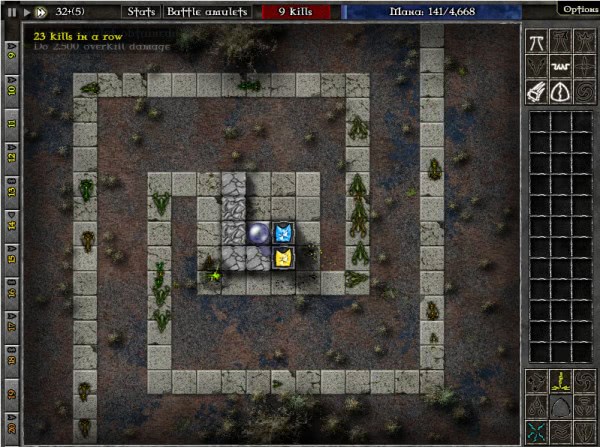 The following elements are available on maps:

All games have certain characteristics, including damage, range and firing speed, which increase when you upgrade them.

The game starts in pause mode, giving you all the time you need to plan and execute before the actual game starts. You usually end up creating at least one gem, and if no tower is available on the map just yet, a tower as well.Â  As far as monsters go, there are different types available that make your life hell. From regular monsters without any traits to swarms and armored monsters. And while they more or less look all alike, the variety is still enough to keep you entertained.

You gain experience with every map that you finish, and levels which provide you with skill points that you can use to increase certain skills available to your wizard. Skills range from more mana or cheaper gem creating costs to improvements for individual types of gems. You can add or remove points from skills at any time, to change your overall strategy or be better prepared for a taxing level that is only giving you access to specific types of gems.

Free users only get access to two skill rows, while premium Armorgames users get access to a third row. While that is unfortunate, it does not really limit the game too much. What I personally really like about it is that it is offering some variety in forms of gameplay. On some levels, you see bonus markers on the map, that are beneficial to the monsters. This can mean that they are healed, made invulnerable for some time, or do not give mana when killed. It is sometimes imperative to destroy those as soon as possible, either by throwing gem bombs at them or placing a tower near them that fires on them. But those markers are not the only thing you will encounter. There are buildings where enemies spawn, which you can destroy in the same way, and mana pools that you can tap in to get extra mana during a map. At certain times, you also have the task to charge a mana pool on the map, which you need to do while defending your own orb.

As gar as the labyrinth goes, it is all about the level selection map. You start with a single discovered area of the map, and work your way through the available areas to the very top. 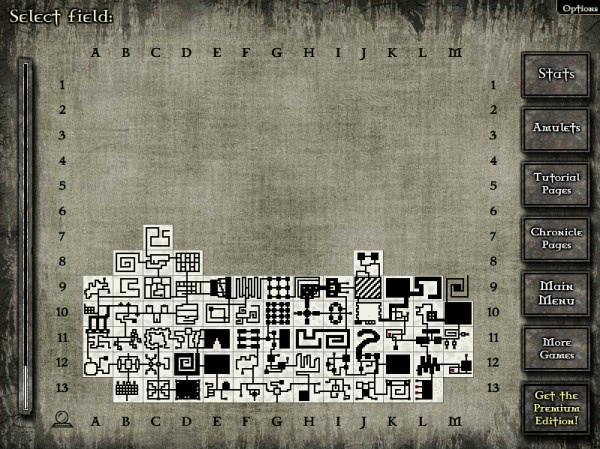 Some areas are blocked until you reach a minimum level, and some may be a lot harder than others. If you come upon a level that is really hard to beat, you could try and vary the skills that you have in your arsenal accordingly, for instance by boosting the available gem types.

You can change map parameters during start, to make it harder but also more rewarding experience-wise. You can for instance increase the number of waves, make the enemies stronger, or double the amount of monsters per way.

Gemcraft Labyrinth is a fun game to play, despite that some of the game's features are only available in the premium edition. If you like tower defense games, you will love this game