Saving money when you print is all the rage these days, especially with both household and business budgets being squeezed ever more tightly.Â  It's not surprising then to see a resurgence in mono laser printers hitting the market and the Samsung SCX-3405W is one such machine.

It's standard printer fare on paper with a 20ppm print speedÂ  a 1200 x 1200 ppi resolution, and fold down flaps for the paper input tray (150 sheets that one) and the output tray (100 sheet capacity).Â  From the front too it's not exactly going to shout out at you from across the room.Â  Personally I felt that the big gawping mouth on the front made it look a bit like one of those toasters you find in hotel breakfast rooms. 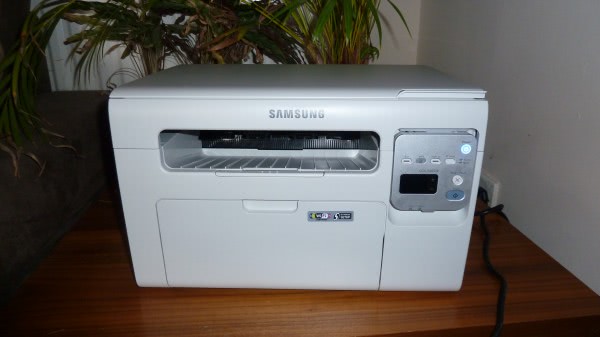 But looks aren't what this printer is about.Â  It's in the extras that this machine shines and they begin with a handy A4 scanner on the top that's so cunningly disguised you might even miss it.Â  It has a very capable 600 x 600 dpi resolution in standard mode with a maximum resolution of a very impressive 4800 x 4800 dpi.Â  It's also able to do photocopying as a very respectable 20 ppm and it's damn near silent.

In fact the whole printer is pretty silent which is just what you need in a modern home or small office.Â  There's nothing worse than nasty clunking sounds being made by a printer as it starts up.Â  You don't get that from this machine.

But this printer has even more to offer than that.Â  The front panel contains flip-out controls featuring a 2-digit LED display and very sensible buttons.Â  The WPS button was the one that interested me the most as this is a wireless printer.Â  Now I have experienced trouble with these before getting them properly connected to my network but it was so easy and simple with the SCX-3405W that I was wondering if I'd missed something.Â  Within a few seconds it was connected to the network and ready to print.

It's very good at printing too.Â  There's no hanging around with this machine as it's 433MHz processor and 64Mb of memory get your prints off the starting blocks in no time at all.

So is this all the printer has to offer?Â  Well actually no as it's also one of Samsung's new Eco Printer line-up and comes with special controls in the driver for maximising the life of your toner, paper and all the consumables.Â  There might not be a duplex unit but the printer takes care of it with a special mode that makes it simple to print on both sides of the paper.Â  This is a feature that will be welcomed by many people and anything extra that helps reduce overall running costs will always be welcomed.

Externally it's not a very big printer for what you get at just 389 x 274 x 249mm (15.3" x 10.8" x 9.8")Â  though the paper trays when folded down add a little to this, and it weighs almost nothing at just 6.7Kg (14.7lbs).Â  In the UK all of this can be had for as little as Â£139 (I couldn't find accurate US pricing though it is on sale) which for everything you get, including the eco mode, low running costs, quiet and speedy operation and wireless connection is excellent value for money.

For a small or home office the Samsung SCX-3405W is an excellent little printer at a brilliant price.Â  When compared to an inkjet all in one this little box will give you 1500 pages per cartridge and with those just being mono it's much cheaper to run than its inkjet equivalent.Â  I'd buy one, though I'd be careful to keep it away from the bread bin.