Google Privacy is a Firefox add-on that tries to enforce do not track on popular websites. The name may suggest that the add-on has been created by Google but that is not the case. It is likely that it concentrated on Google in the beginning, and that support for other websites have been added later on in development.

Google Privacy currently supports Google, Bing, Yahoo, YouTube, Facebook and Ask. The basic idea behind the add-on is to modify links on those websites to remove tracking functionality from them. It should be noted at this point that the sites still have options to track users through other means, for instance with JavaScript running on the site or analysis of web traffic.

First thing you may want to do after installing the add-on and restarting the browser is to look at the options it provides. 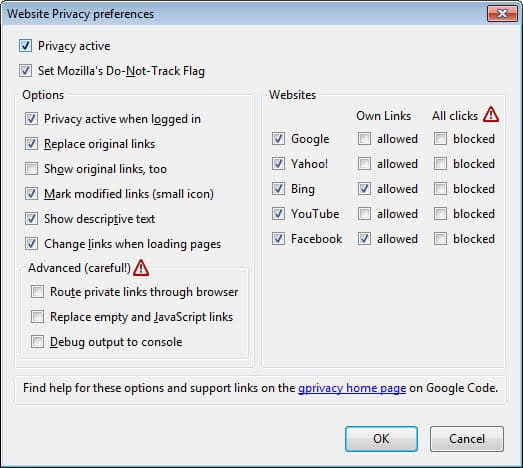 General options are displayed on the left and site specific options on the right. The extension by default displays small icons next to each link that indicates whether the link is a tracking link or not. Green icons indicate links that respect the privacy, while red icons indicate those that do not.

Both the original link and its modified version can be displayed at the same time. It is alternatively possible to hide tracking links automatically so that only safe links are displayed on the supported sites.

The websites listing can be used to enable or disable tracking on links that point to the same website, and to block the tracking of every click on links on the web page instead. The latter could have an impact on the site's functionality though.

The add-ons concentration on six major companies limits its reach significantly. It is therefor recommended to install additional extensions to make up for that limitation. RequestPolicy is a good start, or the excellent NoScript add-on.