Microsoft initially planned to end support for some Windows Vista versions, Windows Home Basic and Ultimate for example, in April 2012. The effect would have been devastating for customers running those editions of the operating systems, as they would not receive patches, both normal and security related, anymore after that date. It would also mean that Windows XP would outlive these Vista editions thanks to its extended support end date.

Only Vista Home Premium, Business and Enterprise were known to receive extended support until April 2017. Microsoft recently has made changes to Vista's product life cycle, and published those changes on the Microsoft Support website.

Mainstream support for all Vista editions will still end on April 10, 2012. The change affects the extended support end date, which has now been set to April 11, 2017 for all Windows Vista versions. 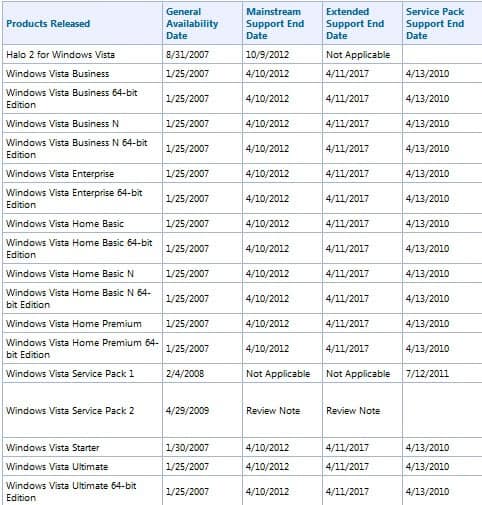 This means that all Vista users will receive free security updates for their system until April 2017. The Lifepolicy FAQ over at Microsoft highlights the differences between mainstream and extended support phases. Extended support includes:

Windows XP in comparison will reach the end of its extended support period on April 8, 2014.

Previous Post: « How To Verify That A Browser Extension Is Not Phoning Home
Next Post: Microsoft Reveals SkyDrive Will Be Integrated Into Windows 8 »