DuckDuckGo, the search engine that I'm using as my primary information retrieval tool on the Internet, has just marked an all new high yesterday. For the first time ever since the search engine opened its doors, it received more than 1 million direct search queries. These are generated by direct user requests. Api requests sit steady at the ten million per day mark.

This may not seem that impressive in comparison to search engines like Google or Bing, who likely get that traffic in minutes and not days. For DuckDuckGo though, it is reason to celebrate, especially if you take a look at the current growth rate of the site.

The search engine received about 100,000 direct search queries a year ago, and about 500,000 in January 2012 (the first 500k hit in November 2011). Direct search queries have nearly doubled in a month's time, and as you can see in the chart, is likely to climb at an accelerated pace in the future. 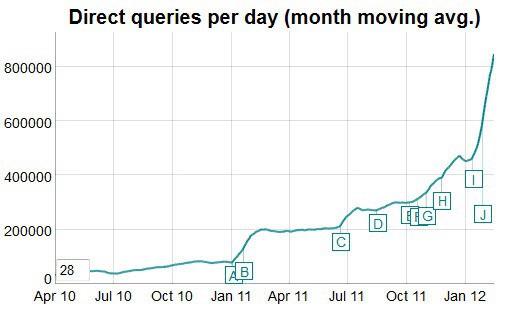 With more users switching to the search engine, recommending it to friends, colleagues and family, and webmasters writing about it, it is likely that the upwards trend will continue at least for a while.

The big jump from 500k to one million came shortly after the last visual refresh and at the time of the Data Privacy Day. The search engine, unlike others, is not tracking its users nor personalizing its user's search results.

The search engine still has a long way to go before it will become a force to be reckoned with in the search engine landscape that is dominated by Google, and to a lesser extend by Bing and Yahoo.

You can read up here why I switched to DuckDuckGo (with tips to do the same), and at this article afterwards that explains how you can improve your DuckDuckgo search experience.

On behalf of the Ghacks team, congratulations!