Which Should I Keep, an HP TouchPad or a RIM Playbook?

As a tech author, blogger and reviewer I get technology sent to me periodically or I pick up bits and pieces myself.Â  This does mean that I can occasionally find something being replaced when its not too old.Â  This is about to happen with two tablets, an HP TouchPad 32Gb and a RIM Playbook 16Gb.Â  Now I'll start by saying that the actual 'Gb' storage volume on each tablet is probably irrelevant as I only store files either on my desktop PC, my laptop or in the cloud.Â  There's no point in having two tablets though so I need to choose which one to keep.

This isn't as easy a decision as you might think.Â  The HP TouchPad has a very useful 10 inch screen, but there's a weight that comes with this.Â  The RIM Playbook is much ligahter as it's smaller, but the 7 inch screen isn't quite as capacious.Â  Then there's the fact that the HP TouchPad has been discontinued (I picked mine up in the fire sale late last year) which does affect both the number and quality of available apps, and updates to the operating system itself.Â  That said, the RIM Playbook's future is also in some doubt and the prices of these tablets are now falling too.

There some fundamental differences between the two machines.Â  Cameras are one good example where the TouchPad has just a 1.3MPÂ webcam on the front while the Playbook sports both front and rear cameras, with the rear one being a healthy 5MP resolution.Â  The Playbook also has an HDMI output, which the touchpad lacks.Â  The Touchpad is a far sleeker-looking device however with an operating system that's simplicity itself not just to use, but to completely master.Â  The TouchPad also has a slightly faster processor, running at 1.2Ghz when compared to the 1GHz of the Playbook and the GPS and route-planning on the tablet are lightning fast. 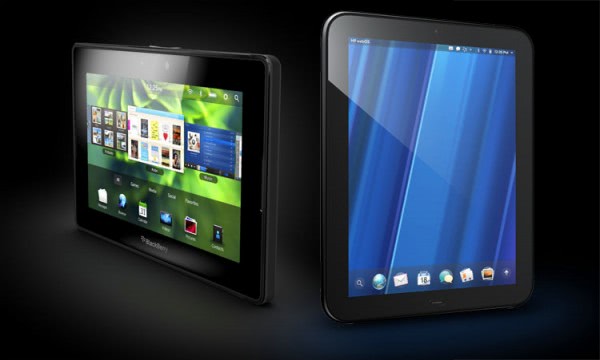 In short though, there are huge numbers of reasons why you might want or prefer one type of tablet over another.Â  For example the iPad 2 is extremely light and has a big 10 inch screen, while some Android tablets are just as light and come in a wide variety of form-factors and weights.

In short then I thought this might be a great opportunity to kick off a discussion over which of these two tablets is better, and which one you think I should keep.Â  WebOS is a very effective and highly polished operating system.Â  Currently QNX on the Playbook isn't quite there if you don't have a Blackberry smartphone (I use a Windows Phone) and will continue to miss out some critical apps until the next operating system update eventually arrives.Â  It's due this month but has been pushed back many times since last fall.

So which tablet do you think I should keep and why?Â  Which is the better tablet, the best hardware, the most accessible operating system and the most expandable system?Â  Which works best with cloud services and has the bext software support?Â  It will be interesting to hear your views on these two machines.

Previous Post: « What Technology Will We Expect with Next Year's PCs and How Will it Affect Prices?
Next Post: « Blackberry Playbook OS v2 Update Due Today [Updated, It's Out!]