Blackberry Playbook OS v2 Update Due Today [Updated, It's Out!]

It's been delayed and delayed further, but despite no official confirmation from RIM the long-anticipated version 2 of the company's QNX operating system for the Blackberry Playbook is due to be released today.Â  AMong the features on offer are native email and calendar apps, something that's taken for granted with any other tablet operating system.Â  When the Playbook was first released, Rim saw the principle way to get email and calendar on the tablet would be to pair it with your Blackberry smartphone via bluetooth.Â  This approach wasn't entirely successful however with a great many Playbook users being non-Blackberry phone owners.

RIM finally showed off the native email and calendar apps last month but they have still been surprisingly cagey about this operating system update, seen as a major milestone for the platform despite being mostly intended to fix and patch bugs.Â  The Facebook app is also rumoured to get an update however.Â  It's said that the update will be availble to download from 4.01am in the USA, which would mean lunchtime or early afternoon in Europe.

The Playbook has suffered trememdously in the battles against the iPad and Google's Android operating system, despite the poor uptake of the latter's recent Ice Cream Sandwich OS update.Â  In recent weeks the price of the Playbook has dropped in many markets with many people suspecting that it was to go the same way as the HP Touchpad with a fire-sale followed by oblivion forever.Â  So far RIM have managed to avoid this fate with the Playbook though the company's own market share overall is dwindling significantly, with many predicting the death of company before too long.

Other new features in the OS update reportedly include Blackberry Balance, which allows users to use their tablet for both home and work, while seperating the two when they're either working or at home.Â  The feature will also apparently include additional security to protect work and business data and keep it seperate from your personal data.Â  This will also allow corporate users to deploy bespoke apps to users personal or work devices, with the user safe in the knowledge that while their activities online and with apps can be restricted during business hours, they are free to do whatever they like outside of work hours without their business data and files being in danger from online activities.

There will also be a Citrix client that will give users remote desktop working, even with Windows or the Mac.Â  Finally the Playbook will be usable as a programmable remote control for the home or in the workplace.Â  The aim here is to make the tablet a useful presentation device in the workplace.Â  As I mentioed earlier, the rest of the OS update is essentially bug fixes and patches.

If you are planning to install the operating system update when it is released, assuming the information that's been leaked from RIM is accurate, then you should first make sure you have your device backed up.Â  You can do this in the Blackberry Desktop Software for the tablet.

So will you be downloading and installing the Playbook v2 OS today?Â  Are you looking forward to the native email and calendar apps or perhaps another feature?Â  Why not tell us in the comments below.

UPDATED: The new version 2.0.0.7971 of the OS for the Blackberry Playbook has now been released and is available for download.Â  In a press release RIM have said... 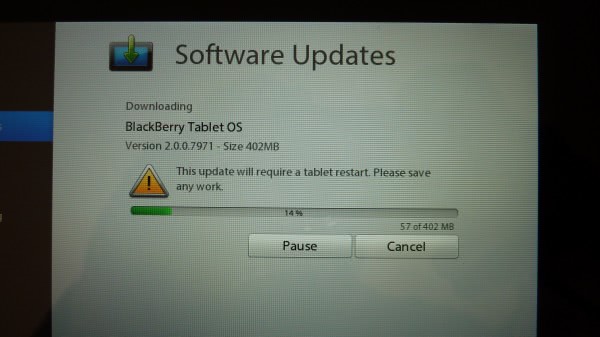 Previous Post: « Which Should I Keep, an HP TouchPad or a RIM Playbook?
Next Post: « Boot To Gecko, Something To Get Excited About?