The author of Speed Clicker has created the program to get more out of games such as FarmVille or FarmTown. While I have never played those games on Facebook, it appears as if players need to click the mouse as fast as possible in various situations like harvesting or fishing. Speed Clicker saves your mouse trigger finger from tiring out. It also gives you an advantage in those games which many will see as cheating, especially when competing against other humans in the game.

But Speed Clicker users can utilize the program for other purposes as well. For instance in other games where clicking performs an action that needs to be repeated a lot of times, or applications where selections are made with mouse clicks rather than entering a number or value with the keyboard.

When you fire up Speed Clicker for the first time, you see the main application window in front of you. Here you define the click rate and the variance. The default click rate speed is set to ten clicks per second. The variance value will move the mouse cursor into a random direction after each click. 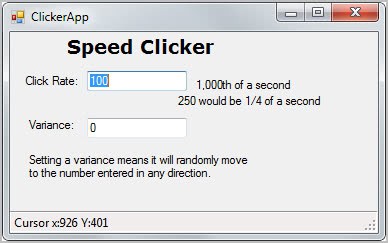 You activate the computer aided clicking with a tap on the Ctrl key on the keyboard. It is currently not possible to change the hotkeys which is unfortunate as they interfere with other hotkeys on the computer (for instance Ctrl-T to open a new browser tab). The developer has however announced plans to integrate the option in a future release of the program.

Here is a short video that is showing it in action in the popular FarmTown game.

The application requires the Microsoft .NET Framework 4.0 on the computer. Interested users can download the latest version of Speed Clicker from the developer site.

Martin Brinkmann is a journalist from Germany who founded Ghacks Technology News Back in 2005. He is passionate about all things tech and knows the Internet and computers like the back of his hand. You can follow Martin on Facebook or Twitter
View all posts by Martin Brinkmann →
Previous Post: « Dashlane, A New Password Manager For Windows and Mac
Next Post: Skype 5.8 For Windows Released »