Update: Google has modified the layout of the toolbar on Google properties. It removed the toolbar and replaced it with a couple of individual icons and links that are displayed instead. The script discussed here on this page is not working anymore as a consequence. The author has abandoned it as there is nothing he can do about it, and we have removed the link as a consequence.

The majority of users visiting the Google homepage or another one of Google's properties will have noticed that Google made another change to the header area. The company did away with the black bar and replaced it with a menu that is activated with a click on the Google logo. This new menu displays a selection of Google services directly, and additional Google products with a click on the more link.

The menu looks like this when it is fully expanded on the screen. Core Google services like Google+, Google Search, YouTube and Gmail are linked in the main black menu. Secondary services such as Translate, Music, Finance or Wallet in the white menu that is displayed by hoovering the mouse over the More link.

The Even More link opens a page listing additional services. Part of Google's userbase has criticized the new design, particularly that it now takes longer to access services that were displayed directly in the black bar, and that Google offers no customization options based on the user preferences.

That's where the userscript Tweak Google Menu comes into play. The userscript adds reordering abilities to the Google menu.

The options are available with a click on the Even More link in the Google menu. The page lists the main and secondary menu entries, and other options that are not linked at all in the standard menu. 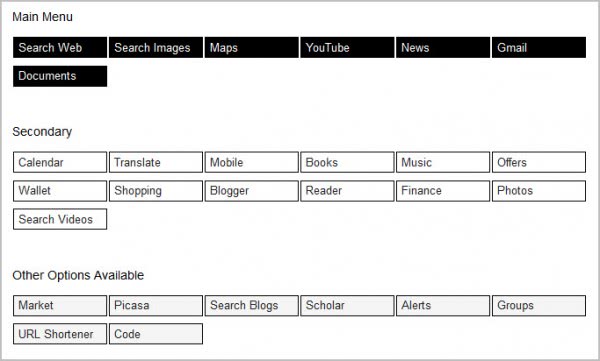 Google services can be moved around by dragging and dropping them to another position. It is for instance possible to remove the Google News link from the main menu to replace it with a link to Google Code. New items can be added without removing existing ones. The menu is automatically expanded to make room for the additional menu items. 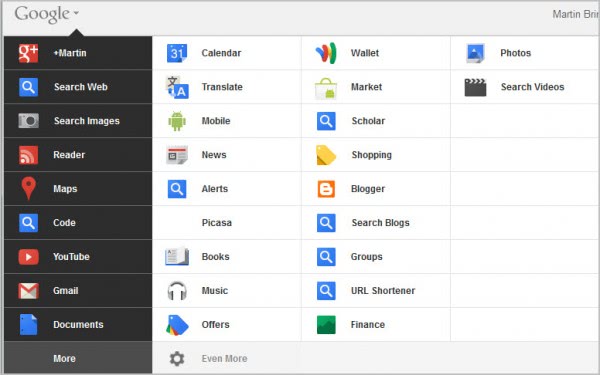 Tweak Google Menu allows Google users to modify the Google menu to their liking. An option to add custom links, e.g. to Blogspot blogs, would be useful but is currently not available.

The userscript can be installed from the official UserScripts repository.