Opera Software has published a recommended upgrade for the stable channel of their browser. Opera 11.60 includes security and stability enhancements as well as new and improved features. This version is the intermediary version of Opera 11 which will be followed by Opera 12 (there may be small patches for Opera 11.60 though).

The new version of Opera 11.60 is already available on the official Opera website. Existing Opera users can consult the release notes for their operating system to find out what's new in the release.

When you look at the changes you will notice that Opera has packed a lot of them in the release. Opera Mail users will find that the mail client has received a redesigned interface. New features include automatic mail grouping by date, pinning of messages which corresponds to Imap's flagged feature and Gmail's starred message feature, a new settings dialog and two lined message lists. 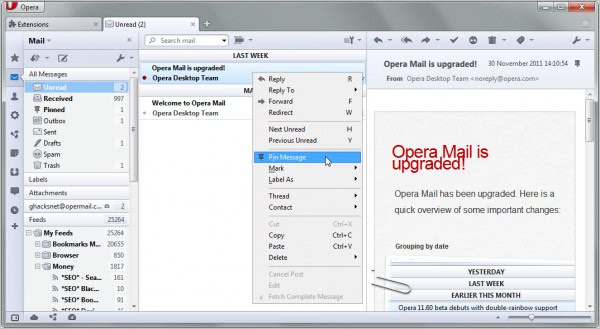 New HTML5 and CSS technologies have been implemented in the browser. This includes the HTML5 parsing algorithm, HTML5 audio and video attributes such as preload or muted, HTML5 microdata support, HTML5 custom scheme and content handler support, ECMA Script 5.1 support, XMLHttpRequest Level 2 support, full support for radial-gradient and repeated-radial-gradiant as well as support for applying image-rendering properties to HTML contents.

Dozens of bugs and issues have been fixed in Opera 11.60. This includes problems opening the Google Mail inbox, a mouse gestures crash, a 100% cpu usage on subpages of the Cisco domain or an inline find crash. 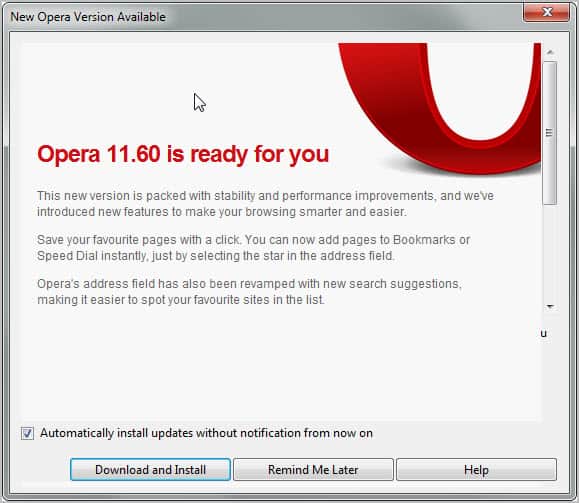 The security section lists five security related issues that have been fixed in the new version of the web browser.

It is recommended to upgrade Opera stable versions to the latest version as soon as possible.

You can read the announcement over at the Opera Desktop Team blog.