Game Saturday was yesterday, why on earth are you reviewing another game today? Because it is bloody awesome. Stealth Bastard is a free 2D-stealth game for the PC. It combines elements of the classic Impossible Mission game with stealth elements of games such as Splinter Cell and Metal Gear Solid. When you look at the game for the first time you may think it is just another jump and run platform game, but that would not do the game justice.

Lets take a closer look at Stealth Bastard. The game is a portable game for Windows. You need to create an account on first start which you can do by entering a username and password. That's it. No email verification or other nonsense. When you select to play the original levels of the game, you will notice that the first are designed as a tutorial to explain the basic game concepts.

It is always the player's task to reach the level exit. You can move the player with the cursor keys and z jumps. You can crouch by holding down, and interact with objects by holding up (for instance to hack computer systems). It is also possible to jump and hold on to a ledge (and jump again from that position). 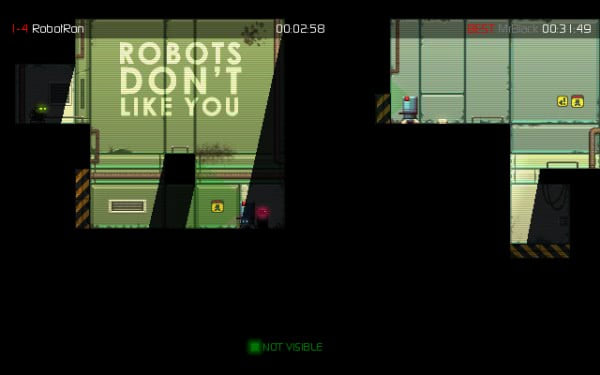 Since it is a stealth game, stealth plays a big role in it. You can hide in shadows which helps to avoid detectors and enemies searching for you. The game puts an indicator on the screen so that you see on a glance whether you are hidden or not. And if you are not, you usually die pretty soon thereafter.

The challenge of the game is to reach the exit in one piece. For that you have to avoid traps and robots in each map. When you look at the traps you see some variety there, from laser beams over crushing blocks and moving platforms. You will also encounter stationary detectors and robots patrolling the area. Considering that you do not have a weapon, your best bet is to stay low and try to sneak through a maps defenses to reach the level exit.

The developers of Stealth Bastard have added puzzle elements to the game. This may include something profane as moving an object over a switch to open a door in the level.

The game has more to offer than just a single campaign. First of all, you compete with your score against all other players of the game. The score is always the time it takes you to reach the level exit. You can replay levels at any time to score better.

The second thing that sets the game apart is the level editor that comes with it. The standard maps are not difficulty enough? Create your own or play maps created by other Stealth Bastard players.

What I really like about Stealth Bastard, apart from it being free and bloody awesome, is that it is easy to learn but hard to master. That, and the fact that it concentrating on stealth and not weapons and fighting. That's very refreshing The visuals are very nice, as are the music and animations.

This game could have easily sold for $5 to $10 on Steam or Xbox Live Arcade. My bet is that it would be highly popular on those channels.

I highly suggest you give Stealth Bastard a try. You can download the game from the developer website directly. The editor and everything else you need to play is included in that download.