Halloween, the night before All Hallows Days, is only a few days away. The holiday usually involves attending costume parties, trick or treating, bonfires, playing pranks and doing other "scary" things. The computer is usually not linked or included in any of those activities.

Windows 7 users who want the full experience can download and install the Haloween Skin Pack (that's how it is spelled on the developer site) to make their system Halloween approved.

The skin pack is a total conversion pack for Windows, which means that it will make changes to many different areas of Windows. It is highly recommended to create a System Restore point and - if possible - a system backup before installing the new theme on the computer system. 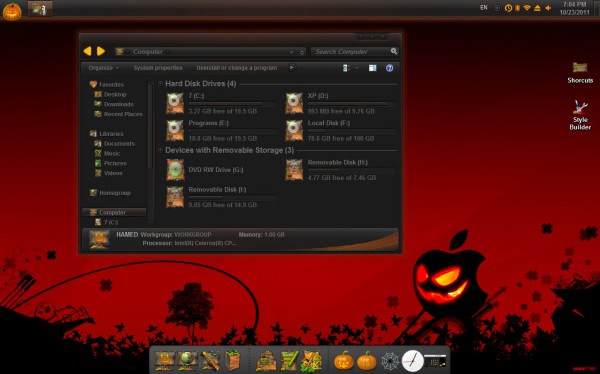 The skin pack incorporates many different programs and tools, including Universal Theme Patcher, Windows 7 Boot Updater, Rocketdock and themes, wallpapers, icons and cursors designed by various artists. The download has a total size of 29.5 Megabytes.

The developer recommends to uninstall existing skin packs on the system and to turn off the user account control feature of the system before installing the Halloween skin on the PC.

Provided for download on the developer's Deviant Art page are installers for 32-bit and 64-bit editions of the Windows 7 operating system. 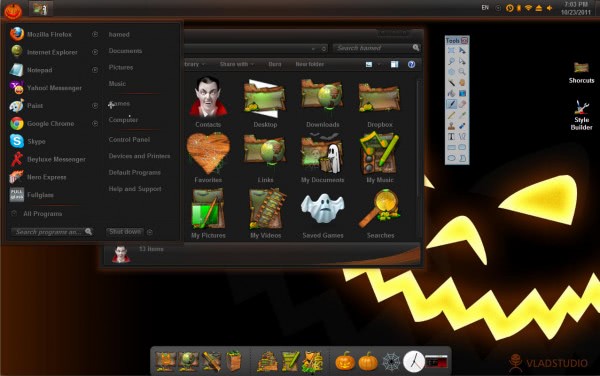 Some users may need to run the skin installer with elevated rights so that all changes to the system can be applied.

Please note that the installation of the skin pack will make many modifications to the Windows operating system. While it is relatively easy to install the skin pack as it is supplied as a single executable, users may run into problems restoring their old system settings in case the operation goes wrong. Again, make sure to backup your system before installing the Halloween theme pack. (via)