Today's digital photo cameras produce large image files that are usually in the Megabyte range. While that's not a problem for Gigabyte Flash cards or Terabyte hard drives, it can become a issue when you try to send the photo via email or publish the photo on the Internet.

Sending photos as email attachments is still limited by the email providers maximum email limit. And while some providers like Hotmail circumvent this by using file hosting capabilities to artificially increase the limit, it is not something that can be ignored right now.

The same is true for publishing photos on the Internet. Larger images take longer to load which means that some visitors may close the tab if it takes to long to open. And the webmaster benefits from a faster page loading time as well by getting a few extra points if the images are optimized. Not to forget that some services limit the space that users can use for their media files.

JPEGmini is a new online server to optimize photos in the jpg format. The issue here is that the service currently is only offered online without api or external tools. This means that it is relatively cumbersome to upload photos to the service. 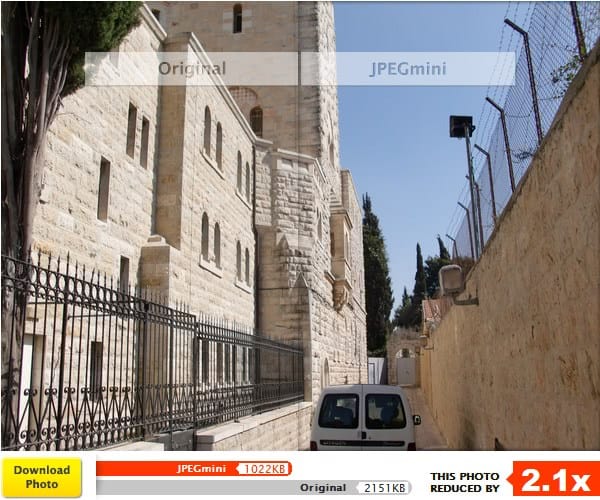 JPEGmini displays the original and optimized version of the photo next to each other after the image optimization. This way it is directly possible to compare the two image versions on screen. Both file sizes and the photo size reduction factor are displayed on that screen as well. A vertical slider is available to displays more or less from one of the images on the screen.

I'm no expert but I cannot really see a difference between the original and optimized photo. I ran the photo through the photo optimizer RIOT as well and came to the same conclusion.

JPEGmini can be used in situations where you cannot install or run third party software, but need to reduce the size of a picture. This can be for example in an Internet Cafe during holidays, or on a computer at work.