I was asked recently how the previous file versions where created by Windows, and if there was a way to change the amount of file versions to go back.

The less space you assign to the features, the less file versions you will be able to restore at a later point in time. 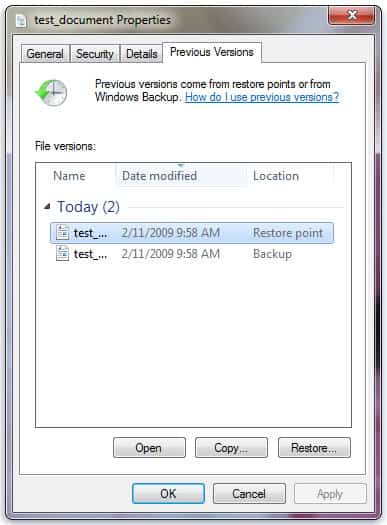 Users who only create no more than one or two System Restore points will see fewer file versions in the listing than users who have given the System Restore feature more space on their hard drives. The same is true for users who regularly backup data on their computer.

The feature falls short, especially when it comes to storing all previous file versions of a file for backup and restoration purposes. Users who want to make sure they can restore all file revisions need to look elsewhere for that functionality.

There are better options to make sure you have a backup of different file revisions in the Windows operating system. Among them previously reviewed programs like File Hamster or an online file syncing service like Dropbox.

Martin Brinkmann is a journalist from Germany who founded Ghacks Technology News Back in 2005. He is passionate about all things tech and knows the Internet and computers like the back of his hand. You can follow Martin on Facebook or Twitter
View all posts by Martin Brinkmann →
Previous Post: « Migrate Your Email Between Providers
Next Post: How to Create a Hotkey or Shortcut to Eject a USB Drive »