Microsoft has added several handy window management shortcuts to the Windows 7 operating system. These shortcuts can be used to dock the current window to the left or right half of the screen and to maximize or minimize the current window. Very handy for instance to display two windows next to each other on the monitor if it is of sufficient width.

The shortcuts use the Windows key plus one of the cursor keys. The left and right cursor keys dock the window to the selected side of the monitor, the up key maximizes the window, the down key minimizes it.

Win7Keys is a program for Windows Vista and Windows XP that replicates the new keyboard functionality on those operating systems so that users of those systems can make use of it as well. 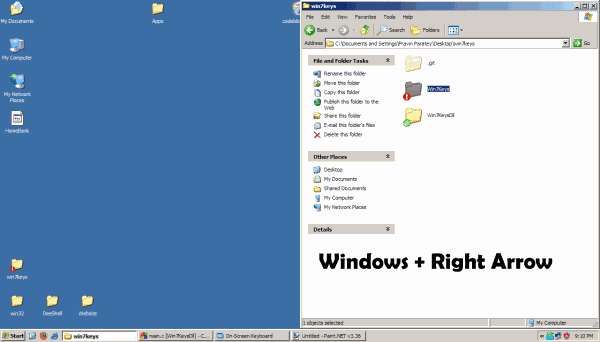 The program needs to be installed before the shortcut functionality becomes availability. Win7Keys runs in the background when it is started. The application has no interface which means that there are no options available to change the shortcuts.

The default shortcuts use the very same keys that are used on Windows 7. Both the program and the program source code can be downloaded from the project website. Win7Keys is compatible with all 32-bit and 64-bit editions of the Windows operating system. This includes Windows 7, even though it does not make sense to run the program under that operating system.

Windows users who like more control over the shortcuts can take a look at the Windows 7 Shortcuts program instead. The program offers customizable shortcuts and two additional shortcuts that are not offered by Win7Keys.

The program can change a window's transparency minimize all windows but the active one on top of the four original shortcuts. Even better, Windows 7 Shortcuts does not have to be installed, it can be run from any location it has been placed in.

Do you use the windows management shortcuts under Windows 7 or previous versions of Windows?

Update: The website the application was published on is no longer available. We have uploaded the last version of Win7Keys to our own server. You can download it with a click on the following link: win7keyssetup.zip

Note that we do not support it in any way.