Probably the biggest issue that Solid State Driver owners face, besides the exorbitant price to Gigabyte ratio is the small amount of space compared to conventional hard drives. This can mean a lot of juggling around of data to make sure that the Solid State Drives don't drop below the 10% free space barrier, as it can have a negative impact on the drive's performance on the computer.

I have reviewed several programs to link and move folders, applications and games from a Solid State Drive to another drive to free up space. This includes Steam Mover and the portable program Junction from Sysinternals.

SSD Boost Manager offers a similar functionality on first glance. Windows users can configure directories that they want to move and create symbolic links for so that everything works as if the folder would still be in its original location on the drive.

But instead of just doing that, it offers to swap the folder back to its original location on demand. That's for instance very handy for gamers who do not want to uninstall games, but need storage space on their SSD for a new program. They can use SSD Boost Manager to move the folder and create a symbolic link to free up the space, install and play the other game, uninstall that game and move the old game back to its original location (or instead of uninstalling move and create a symbolic link for that second game as well).

Most users should switch the interface language from French to English by clicking on the flag button in the app. A click on the Add button opens the configuration menu. 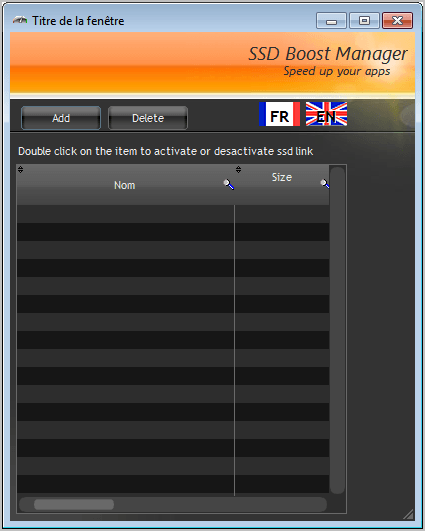 Here you can define a name and the directories of the Solid State Drive and the other folder you want to use. It is optionally possible to create a profile for each subdirectory of the selected folder, which can be handy if you have a games folder on your drive with multiple games installed.

The default action that is selected is to move the data from the SSD to the HDD. This can be switched easily to restore the HDD data back to the SSD.

The idea to swap apps and games back and forth could be interesting for users who do not want to uninstall the applications or games when they run out of space. The English version of the interface could use some tooltips and explanations on how to use the program properly. Another problem that non-French speaking users can run into is the French installation of the game.

Interested users can download SSD Boost Manager from the project homepage, which is also only available in French. The program itself is compatible with 32-bit and 64-bit editions of the Windows XP, Windows Vista and Windows 7 operating system.