We presently use application managers such as the Active Directory for the verification process while using the access credentials for various Windows Applications and other local network web applications. But as the environment portal changed from the local to external web based SaaS applications the managers like the Active Directory were inefficient as they became lot more complex. This complexity made the companies and the users want to ward off the use of such App Managers. Now to use all the third party web applications the users have to preserve different passwords and usernames for each of the applications. Generally the usernames and passwords for all the applications are saved on a .txt or .docx file or simply memorized by the user. Such methods are often risky as well as insecure and expose valuable data, which may be stored in the application database, to an unauthenticated outlet. This problem was solved by the VMware development team after launching the Horizon App Manager.

The Next Level Application manager: 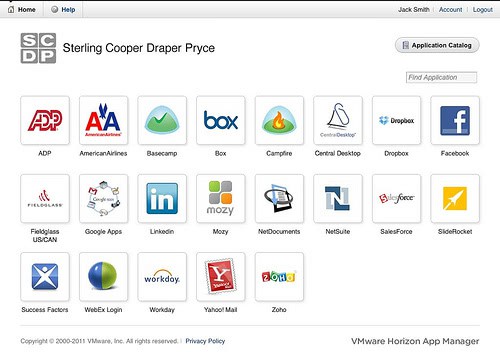 VMware announced the launch of its new end user web application manager the VMware Horizon Application on 17th May 2011. This application manager allows the users to effectively manage the third party cloud applications on a single virtual platform in a similar way as a Microsoft Active Directory acts to manage the accounts on numerous applications based on the internal systems. VMware impressively changed the way the access credentials are managed for the ever increasing population of applications on the cloud such as Box.net, Broad Vision, Google Apps, Salesforce.com, WebEx and Workday.

By simplifying the management of the credentials used by the applications both the IT admin and the end users benefit. The application manager securely manages several access credentials of numerous different third party applications using only a single identity dedicated for both the enterprise administrators and the users. In addition, it provides a single platform to access all the cloud applications which are used by the enterprise and its users. The Horizon App Manager ensures that there is a granular level of secured access for all the different types of applications as well as secured control of the data.

The Horizon App Manager is a unique service which is very easy and fast to set up. The Horizon Application Manager is a paid service from VMware that costs $30 per user, per year. It allows you to use your local access credentials for all the applications based on Cloud/SaaS. In the Horizon App Manager the enterprise admin will use a light weight virtual tool to configure each of the web based or Cloud based applications which are to be used by the users in the enterprise. Once the configuration is done, the admin can assign access permission to the varied users for various SaaS, Cloud or web applications according to their account and membership using a simple check box on the virtual interface of the App Manager.