With Firefox downloads in the millions on launch day, it is now time for Mozilla to look at user feedback and make preparations for the next big iteration of the web browser: Firefox 5. With rapid release in mind, Firefox 5 may be just around the corner. In Life After Firefox 4, Whatâ€™s Next we looked at Mozilla's development plans and noticed that the developers had plans to speed up the development of the browser by releasing a new major version every three months.

The new rapid release plan would in theory allow Mozilla to release a new major version of Firefox every six weeks, but three months would give them more time to implement changes into new versions. Mozilla currently plans to release three new major Firefox versions in this year, which would bring the browser to version 7 at the end of 2011.

First builds of Firefox 4.2a1pre have appeared on the Mozilla release ftp server, and while the version might indicate a 4.x release, it is in fact the first step towards Firefox 5. It is however still likely that the developers will ship at least one update for Firefox 4 before Firefox 5.

Firefox 4.2a1pre will eventually turn into Firefox 5.0 further down in development. 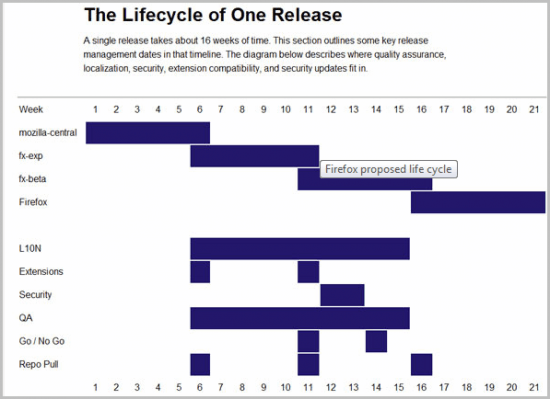 We do not know much yet about the feature additions other than what has already been posted in the Firefox 2011 roadmap.

According to that roadmap Firefox 5 will contain the following new features:

A preview of proposed user interface changes is available at Are We Pretty Yet.