I'm not a huge fan of emoticons or animated gifs, but I know a lot of users who are.

Just head over to your favorite forum or social messaging site and look at the posts on your wall, it is likely that you will see at least some emoticons or images posted on that wall.

Some Internet users like to upload their animated gifs, emoticons and images to free file hosts, or maybe their own web hosting account. This way, they can hotlink those images whenever the need arises.

The only problem with this approach is that the hotlinking url of those images needs to be known. Sure, you can head over to the image host to grab the url whenever you need it, bookmark the images or save the links to a text file; Or, you could install the Firefox add-on EmotiConverter to improve the process.

EmotiConverter turns web images into freely configurable emoticons. New emoticons are added in just a few steps. It begins by copying the image url of the image that you want to turn into an emoticon, before pasting the url into the add-on's options to create a new custom emoticon. This new text emoticon triggers the display of the image automatically from then on, provided that the web software you are posting it on supports the posting of external images. And in the case that you forget the shortcut, you can simply open the options again to see a list of all configured emoticons

Lets take a closer look at the configuration. Lets say you want to turn the Ghacks logo into an emoticon. You right-click the image on the Ghacks homepage and select Copy Image Location from the available options. This saves the full image url into the clipboard. 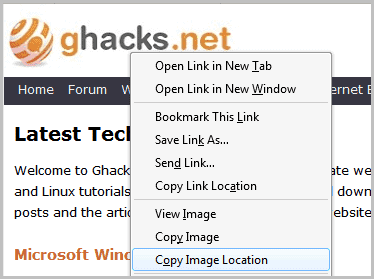 The new emoticon is then created with a click on Tools > EmotiConverter > Options.

Paste the image url into the Image Link form. You can do that with a quick Ctrl-V, or with a right-click and the selection of paste. The image should appear in the Emoticon preview.

Click the Shortcut field afterwards and insert a new shortcut for the emoticon. It is suggested to add a special char to the shortcut to avoid that it is accidentally added to a post on the Internet.

A click on Add activates the new shortcut. From that moment on it is possible to add the image to posts on the Internet by writing its text shortcut to the post form.

The extension adds img tags before and after the image, these tags can be changed under the Options tab; Helpful if the favorite forum or site supports a different image tag format.

The add-on developer has created a short demonstration video that visualizes all steps necessary.

EmotiConverter is compatible with all Firefox versions. It can be directly installed from the official Mozilla Firefox add-on repository.

Update: The add-on has not been updated since 2011 but it still works in recent versions of the Firefox browser.