Remember Computer Customizer, the free program to add system tool links to the Windows Explorer My Computer display? The developer has renamed the application to Companel. The new version, as the name would suggest, has been improved so that it is now possible to add items not only to My Computer but also the Control Panel.

The software is still portable and needs to be executed with elevated rights. The interface itself has not changed a lot, only the number of items that can be added and the new Control Panel Items tab are new.

It appears that the available items have been more than doubled by the developer. 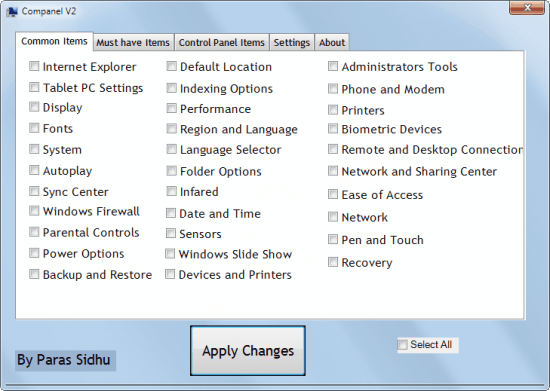 A quick count reveals more than 60 items that can be added to My Computer. The items are divided into the common items and must have items tabs. Some of the new options of the Common Items tab are access to the Windows Firewall, Power Options, Backup and Restore, Phone and Modem, and Recovery.

The Must have items, which previously were called Other Items, now include links to items such as Default Programs, System Restore, the Recycle Bin, Personalization and the Credential Manager.

The functionality remains the same. You pick the items you want from the list by placing a checkmark in their box. A click on Apply Changes at the end of the process adds links to the selected programs and features to My Computer.

Items are removed in a similar fashion, the only difference is that they need to be unselected before the Apply Changes button is activated. The changes are immediate, the new items appear directly without restart. 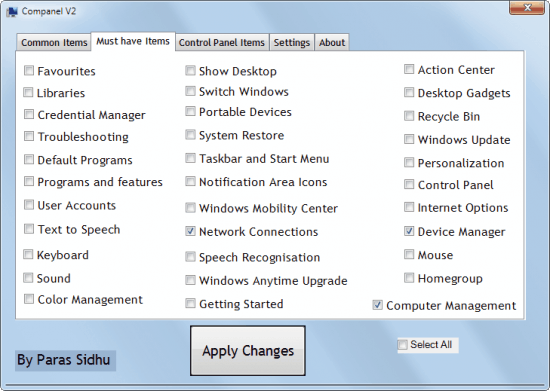 The program supports adding two items to the Control Panel, with the likelihood that the developer will add items in a future release of the application.

It is currently possible to add Internet Explorer and Libraries to the Windows Control Panel which appear as icons after the apply button has been activated.

Companel has been tested on a Windows 7 Professional 64-bit system. It worked without problems. The developer has not posted any compatibility information on his homepage. It is however likely that the program will work under other Windows operating systems as well.