The updates that have been released are already available via Windows Update and the Microsoft Download Center.

Windows Server 2008 R2 is the only server product affected, the vulnerability received a rating of important on this system.

Below are links to each security bulletin. The Bulletins offer information about the affected products, severity rating and non-affected software.

Users can update their Windows operating system and Microsoft Office via Windows Update, the Microsoft Download Center or by downloading the March 2011 Security Release ISO image.

In other news, Microsoft is still working on a fix for the MHTML-related vulnerability that was discovered in January. Additional information are available at the Microsoft Security Response Center. 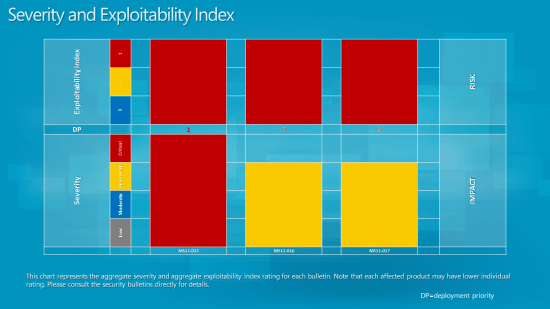 Article Name
Microsoft March 2011 Patch Day Overview
Description
Our overview of the March 2011 patch day offers information about all updates that Microsoft released for its products in this month.
Author
Martin Brinkmann
Advertisement