Leo Backup is a free and commercial backup program for the Windows operating system supporting all the features you'd expect from a software of its kind.

Data backups play a key role in disaster recovery plans. Many Windows users on the other hand do not backup their data regularly, if at all. Windows itself comes with several recovery options, from shadow copies to the built-in system restore - but those may not be enough, depending on the "disaster" that struck. What if your PC gets stolen? Right, the backups are on the PC and you cannot recover your data, if you have not stored the data remotely as well.

Backup software is the solution. Newer versions of Windows come with limited backup capabilities, a better solution in most cases is to download and make use of a third party backup solution.

Leo Backup is a free and commercial backup solution for the Windows operating system. The free version is limited but sufficient for basic backup needs while the pro version adds features such as SFTP, shadow copy, or a service mode to the program. A detailed comparison of the free and professional versions of Leo Backup is provided on the developer website.

A wizard guides the user through the backup creation. The standard options to add files and folders are available, as are several interesting custom solutions, for instance to backup the Windows profile, the Windows Registry, Microsoft Outlook settings or the Mozilla products Thunderbird and Firefox. The standard and custom options can be combined in one backup.

Filter settings are available to exclude or include specific data types. Users who only want to backup documents could add those document formats to the filter settings to make sure that only those are included in the backup. The program has no pre-defined filter lists for popular file types, something that the developers should consider adding in an update.

Leo Backup can backup data to a local disk or network disk, or to a remote ftp (optional SSL/TSL) or SFTP server.

Support for secure data transfer options when transferring files to remote servers is usually a core requirement for organizations that evaluate backup software, to make sure that the transferred data is protected during the transfer.

Individual users benefit from those protocols as well, and it is generally recommended to make use of them. Most free backup programs do not offer those options.

Additional backup settings can be configured after the backup location has been selected.

Leo Backup is configured for incremental backups by default, which only updates files in future backup runs that have been changed or added. Disabling the option configures the backup program to run full data backups every time.

The advantage of incremental backups is that you save space on subsequent backups as only changed or added data is included in those backup jobs.

Users can enable compression to save storage space at the local or remote destination, encryption to add an additional layer of security and timestamped folders for better identification of the backup folders.

Backups can be scheduled during configuration so that Leo Backup runs them automatically on schedule after the initial configuration has been completed. Available for selection are daily, weekly and custom intervals.

Programs that are run before or after the backup, and notifications are configured in the last step of the backup setup.

The backup software supports email notifications only. It is possible to attach the log file to emails, and configure the notifications to only be send out if errors have occurred during the backup. 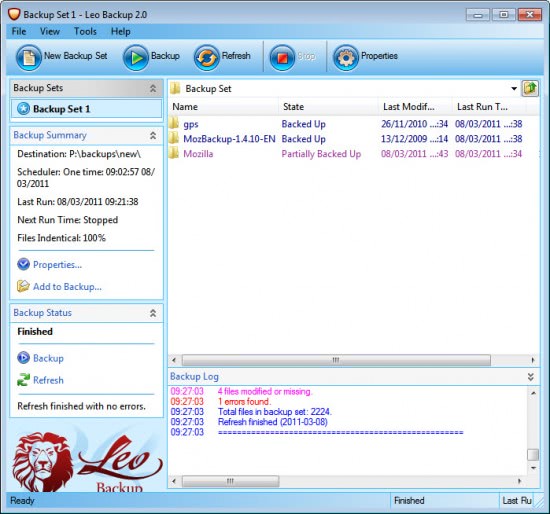 Leo Backup supports the creation and management of multiple backup sets which are all displayed in the left sidebar after they have been created. The files and folders that are included in the backup are shown after selection on the right.

The sidebar displays a backup summary with information about the backup destination, schedule and last run.

Backup sets can be modified with a double-click. All backup options are displayed in tabs in a single window which makes it easier to modify backup settings.

The developers are working on a free version of Leo Backup that will be first released in this month. It will offer a similar feature set with a few exceptions.

The commercial version is available as a 30-day trial version on the official website. The download page links to a pdf manual and the online user guide as well.

The program could use some polishing touches in some areas, namely the file filter and reporting service. Additional pre-configured custom backup options, like backing up Internet Explorer data would be welcome as well.