I own a few boardgames that I can rarely play at home or a friend's house. Why? There are several reasons for this. I'm often unable to find enough players that like a specific game to play it. Britannia and Civilization come to mind. These games last upwards of four hours and it is hard to get enough enthusiastic players to play the game.

One option available is to play games that you own via the free Open source software Vassal. It is not possible to play all games though but a selection of popular boardgames such as Carcassonne, Dominion or Risk and more advanced games such as Arkham Horror, the card game Illuminati or Axis and Allies are available as game modules.

A total of 886 modules are available for download at the official website. Not all are standalone games though as it is quite common to find expansions for games in the mix as well. The majority of games offered belong to the war gaming category but players will find different genres there as well. 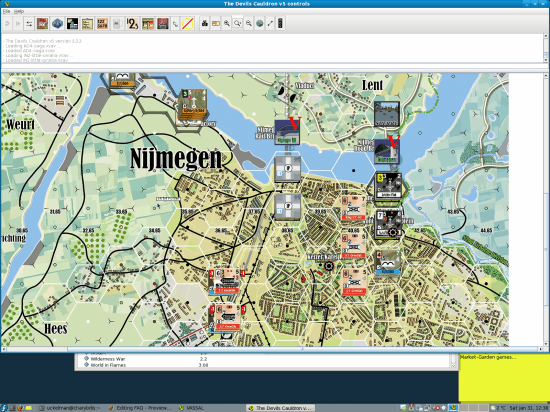 Vassal players need to own the boardgame that they want to play online with other players since some of the common cards of each game are blanks to make sure the game is owned.

A game session basically works by connecting to the Vassals server and creating a new room for that specific game session. Friends and fellow players may join that room so that the game can be started once all players have joined it.

It is definitely a good idea to start with the tutorial map to learn the basic controls first to avoid problems during game sessions. The docs section offers several tutorials and first step instructions that are a must read as well.

Users who are still having problems should consult the forum or the wiki for help and additional information.

Vassal is not as easy to use as games that are offered on websites such as Brettspielwelt which are run on site.

Vassal offers a higher versatility as it is for instance possible to play games in a pbem like fashion. And the number of available games is a lot higher.

Vassal is available for Windows, Linux and Mac OS X. It requires the Java Runtime Environment 5 or later to be installed on the computer system.