I was pretty excited when I read for the first time about Microsoft's Arc Touch mouse. The unique design and touch capabilities brought features to the table that no other Windows mouse offered at the time of writing. Many questions remained unanswered though which I definitely had to find out before I'd consider purchasing the mouse:

The Microsoft Arc Touch Mouse has primarily been designed for mobile use which is especially outlined by its design. It is bigger than a standard laptop mouse but smaller than a regular desktop mouse. The mouse ships in flat stage, with two AAA alkaline batteries, a booklet and a wireless transceiver for the USB port of the computer. The mouse uses Microsoft's Bluetrack that ensures maximum compatibility on nearly every surface the mouse is used on.

Setup of the mouse was a breeze. All I had to do was to put the two batteries into the mouse, and the transceiver into a free USB port of the computer. The mouse is activated by bending, which is indicated by a blue light at the bottom. The Microsoft Arc Touch mouse was recognized automatically by the Windows 7 operating system and additional mouse drivers (Microsoft IntelliPoint) were installed. It was ready for use right away afterwards.

The mouse design is spectacular which can be attributed largely to the unique bending feature and its looks. The bending has a functional use as well, as it turns the mouse on or off. The mouse itself is very compact which is ideal for users who travel a lot. It fits into nearly every pocket or laptop bag without bulging it to much, a problem that regular mice often cause, if they fit at all. 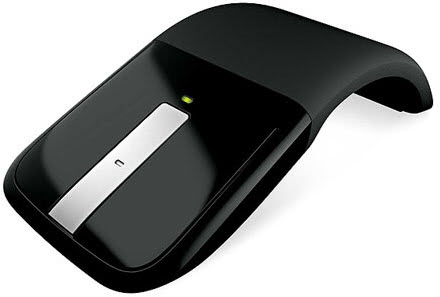 The mouse itself looks unique and interesting on first glance, and it happened more than once that people came over to my table to take a closer look. It features two physical buttons that are used for left-clicking and right-clicking, and a touch strip in between that offers multiple uses, among them middle-clicking that is emulated by two finger taps on the strip. This takes some getting used to time because of the tapping and the fact that it takes two taps to middle-click. The tapping itself however is very comfortable.

A magnetic storage space for the USB transceiver is provided at the bottom of the mouse which is ideal for traveling as it ensures that the mouse and the transceiver are always in the same place, and thus ready for use.

The glossy black of the mouse front is a magnet for fingerprints. Lastly, it is possible to put to much pressure on the mouse to flatten it. It is however unlikely that this happens under normal circumstances as the pressure has to be quite high to achieve that.

The middle strip offers several touch capabilities that need further explaining. Microsoft launches a website after driver installation that explains those features in detail. We already mentioned that it is possible to middle-click by tapping twice on the center of the strip. Pages are scrolled by sliding the finger up and down on the touch strip which feels more natural than using a scroll wheel for the same effect. Flicking the mouse up and down accelerates the scrolling to quickly scroll through documents.

Vibration Feedback is enabled by default which mimics the sound and feel of a traditional scroll wheel. It does act as an indicator as well as touch feedback stops when the finger leaves the touch strip. 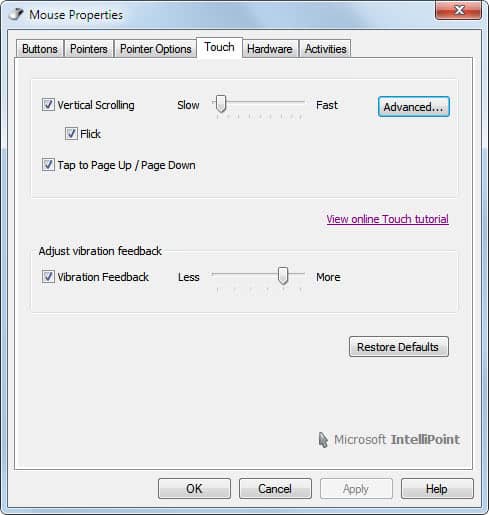 Tapping once at the bottom or the top of the touch strip scrolls a full page up or down on the active page. This takes some getting used to time before the right "spots" are tapped on every time.

The middle-tap action can be changed in the mouse settings, the up and down single tap actions cannot. That's fairly inconsistent and it would be great if Microsoft would update the mouse driver to add that option to the mouse; It would increase the number of possible mouse buttons from three (left, middle and right) to five (top and bottom of the touch strip).

Microsoft's Arc Touch Mouse has been designed for mobile usage, and for that it is an excellent choice, especially for users who want a compact stylish mouse that goes along well with their laptop. Users with big hands will have their troubles working with the mouse effectively due to its compact size.

It is an ideal mouse for uses who have been working with smaller laptop mice before as it is a bit larger than those and offers a far superior functionality. Users who are used to standard desktop mice on the other hand should try it out in a shop or at a friend's house first before they make the decision to buy it.

Microsoft was nice enough to sponsor one Microsoft Arc Touch mouse for a give away here at Ghacks. It is unfortunately only open for users from the United States. If you are from the US and want to win a Microsoft Arc Touch mouse let me know which mouse you are currently using. I will draw a lucky winner in 48 hours after the review has been published. Please add the information that you are from the US to the comment.

Previous Post: « ZX Spectrum to be Reborn as Bluetooth Keyboard
Next Post: How Spill-Proof is Your Expensive New Keyboard? »