ZX Spectrum to be Reborn as Bluetooth Keyboard

The inimitable Sinclair ZX Spectrum is to be reborn for its 30th birthday with an interesting twist.  Games company Elite, which wrote many of the best-selling titles for the original home computer, is planning to relaunch the Speccy as a Bluetooth keyboard for mobile phones according to the Telegraph.

Why?  They've noticed the upsurge in popularity for the games of old.  Call it nostalgia if you like but emulators for classic computers can now be found all over the place and 67% of all smartphone users now say they use their handset for gaming.

The new kit would see the return of the squidgy keyboard but with no computer inside.  Instead there would be a Bluetooth system to pair the keyboard with your phone. 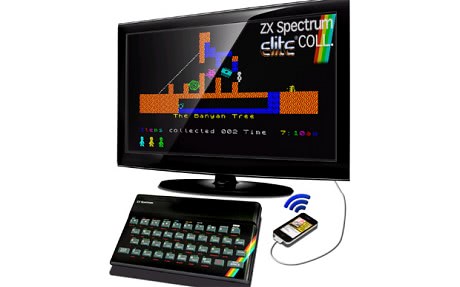 Quite how this will work with a mobile phone screen remains to be seen however some smartphones, such as Nokia's N8, are now being equipped with HDMI ports so that you can plug them directly into a modern TV.

It's all jolly exciting as once again we could be enjoying the likes of JetPack, Manic Miner or Death Chase (three of my personal favourites) the way they were originally intended to be enjoyed.

There has been a resurgence in recent years of nostalgia gaming.  This was boosted by the Nintendo Wii which demonstrated that graphics didn't have to be cutting-edge for a game to be enjoyable.  Smartphones capitalised on this and now games such as Angry Birds are everywhere and some of the most popular games around.

Last year the Commodore 64 was reborn as a low-powered PC.  It wasn't really a Commodore 64 though.  We await the release of the new Speccy eagerly, at least I do, and it will be great to experience the games on that keyboard again.

Update: You can register your interest to buy a Bluetooth ZX Spectrum from Elite on the newly created website for the new device. Note that it requires an iOS or Android device. The device will be available "for around" £39.99 when it gets released.