I solved the issue with Steam Mover, a free application that would move contents from the main drive to another drive with the help of Junctions. That way it was possible to move some of the Steam games to different partitions without affecting the functionality of the games or Steam.

JunctionMaster is a new software that is currently offered as an alpha version which means it is at the beginning of the development.

The program offers similar options to relocate folders to other partitions or hard drives without changing the folder path.

Examples of where this may help:

The program integrates into the Windows Explorer shell adding a new option to move and link the selected folder.

This opens a warning first and then a new window with options to select the new location of the selected folder.

A click on Move and Link in the window moves (not copies) the folder and its data to the new location and adds information at the old location that the folder has been moved. Windows and applications will follow the redirect to access the files and the folder.

JunctionMaster can be started from the start menu or its installation directory as well which opens a different interface which is solely used for finding and removing junctions from selected locations. 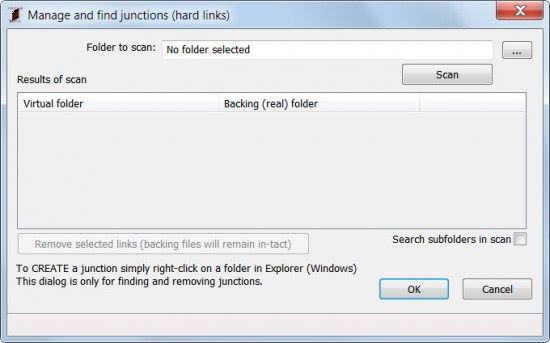 JunctionMaster is provided as a 32-bit and 64-bit version at the developer website. The program itself is compatible with all Windows operating systems from Windows XP on plus Windows NT and Windows 2000.