Mozilla Plans To Move Tabs To Titlebar On Windows

The move from Firefox 3.6 to Firefox 4 will be a major one. Not only functionality wise but also interface wise. Firefox users will have to cope with a lot of changes that the user interface team has made over the past couple of beta releases.

We have criticized several of those changes as they do not seem to make sense or are practical. Moving the link hover information to the top and other information away from the status bar have been major points.

The latest change however seems to make sense in a way. If you look at the browser interface you notice that the titlebar usually offers lots of free space. The titlebar is only used for the website title, or the Minefield button that opens the new Firefox menu.

Mozilla Links discovered information about a recent change in Firefox 4 pre testing builds that move the tabs to the very top of the screen right on the title bar when the browser window is maximized to save additional vertical space in that viewing mode.

This is an experimental feature and it is not clear yet if it will prevail. The topic is currently being discussed Bug 572160 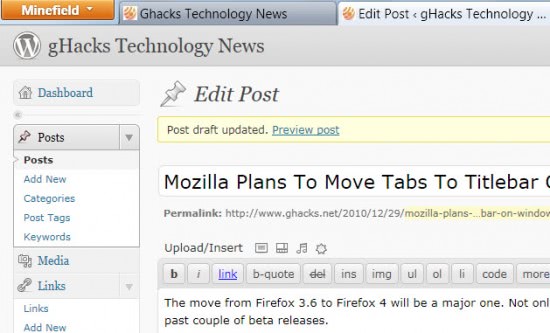 The behavior is identical to that of the tabbar. Tabs are reduced in size when they fill out the complete titlebar and options to scroll left or right are added eventually when the minimum tab width is reached. It does feel kinda strange that the title of the active website is not displayed anymore though. It is now impossible as well to move the window even though most users are not probably going to need that feature in full window mode anyway.

Update: The feature has been implemented in Firefox, but in a different way. When you maximize Firefox now, the titlebar is gone. The only two bars that remain in the browser UI, and only if you move your mouse to the top of the screen, are the tab bar and the navigational toolbar.