One thing that you may want to make sure of if you are working with multiple computer systems is that iTunes, if it is installed, offers the same library with your favorite music on all systems. Syncing files between computers is not the easiest thing to setup, which is why a lot of iTunes users may welcome the new CopyTrans application TuneSwift.

TuneSwift can be used to backup an iTunes library including iPod Touch, iPad or iPhone backups. Even better is the fact that the program uses incremental backups which means that only the latest changes can be backed up instead of the full library.

But the program offers more than that. It can also be used to transfer the iTunes library to a new computer, external hard drive or a new location on the same computer. 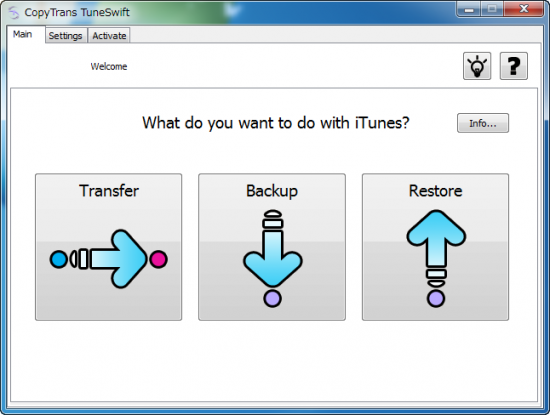 CopyTrans TuneSwift is offered in two versions, a standard version that needs to be installed and a portable version that can be run from the location the program is unpacked to. The requirements are a computer with a 32-bit or 64-bit Windows operating system and iTunes 10 installed. The full feature set includes:

TuneSwift is currently available free of charge. This will change in March 2011 when the program will be offered as a commercial software. Users who download the program now can activate it with the license code TUNESWIFT-ACTI-VATE-ME.

The software is easy to use, as it makes use of pictograms to guide the user through the process of backing up, restoring or transferring the computer's iTunes library.