The Windows operating system has been designed to be compatible with a wide variety of computer systems. From slow systems with little system memory to blazingly fast high-end PCs with solid state drives in Raid and 16 Gigabytes of RAM. That's why the system is never optimized after installation, and why tech-savvy users tend to run a series of optimization tasks on a newly installed PC to improve its performance.

360Amigo System Speedup is a PC optimizer for Windows PCs that can perform optimization tasks on it.

When you start System Speedup for the first time you notice that it pops up a little window that details the startup time of the operating system. Not many optimizers display those information which seem to be taken directly from the Windows startup log. The program lists the number of processes, drivers and services that have been loaded during system start, the time it took to load each and the total time it took to load the PC.

The start screen of the application looks crowded on first glance. System information on the right report realtime PC stats such as the running process count, disk and cpu usage, memory utilization and network flow.

The top menu leads to the core sections of the program which are System Cleaner, System Optimizer and Tools. It is possible to run a system scan right away by clicking on the start scan button. Once done a system status indicator is posted on that page as well. 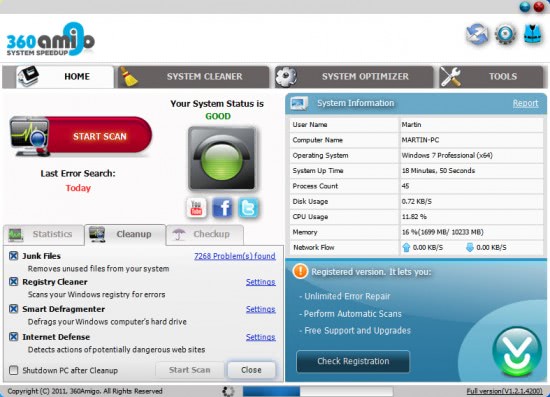 That scan can take a while depending on the speed of the computer system and if it is the first time it is run. The scan runs a cleanup on the computer using the following four modules:

Problems can be displayed in a list with the option to prevent the deletion of files. The junk files cleaner alone found more than 67k files that used more than 6 Gigabytes of disk space on the Windows PC. The majority of files where located in the aforementioned softwaredistribution folder, but it found files in browser cache folders, history folders of Microsoft Office, temp file locations and crash reports.

It is possible and highly recommended to create a system restore point before removing files from the system. A click on Repair in the main interface removes the junk files and corrects the Registry errors.

It is possible to run each module separately under the System Cleaner menu. 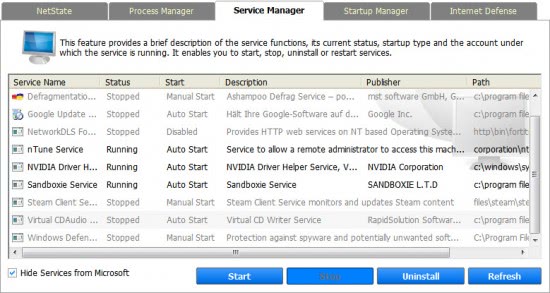 It looks on first glance just like what is offered in all the other system optimizers. But there are a few features in here that are interesting. The startup manager for instance displays not only the usual system and Registry startup locations and the files listed there but also scheduled tasks, browser helper objects, toolbars, codecs and even context menu entries.

Startup items can be removed easily by selecting them and clicking on Remove Item. One needs to be careful though here as it is possible to remove important startup items as well which can have an impact on the system.

The services manager lists all non-Microsoft services by default which reduces the chance for error. It is here possible to start, stop and uninstall services, something that is not possible in the standard Services editor. It is however not possible to change a services startup type.

A right-click on a process, service, file or startup item opens a context menu with options to research the item on the Internet. That's handy.

System Speedup offers some interesting features that I have not seen in other programs of its kind. The program could use some light tweaking, for instance a check if a SSD is installed on the system to disable the defragmentation of the hard drive, or the ability to change the startup state of a service in the service manager. All in all it is an excellent system optimizer with a lot of interesting features.

We have an unlimited number of licenses which are available on this company page that has been created exclusively for this giveaway. You need to enter your name and email to get the software key and download link on the next page. The giveaway page will be active for the next two days.