Why would someone need a video converter in first place? The answer is pretty simply. Because there are to many darn video formats out there, and devices and software that can only play some of them. If you download a video you may need to convert it before you can watch it on your Xbox 360, or your iPhone. The same is true for media coming from your iPhone that you want to play on your PC for instance.

Video Converter for Windows is a video conversion software that supports all popular video formats and then some that you probably never heard of before. Chance is, if it is a video then Video Converter can convert it for you. Lets take a look at the supported video and audio formats, and the corresponding output formats first.

There is not a lot to see when you start up Video Converter. A menu bar on the top, a header bar with some icons and two larger panes of which the right can be used to preview videos that have been added to the left.

Videos can be added by dragging and dropping them into the program interface, or by using the File > Add Video Files, Add Video Folder or Load files from devices. The toolbar button offers similar options except for adding a video folder. 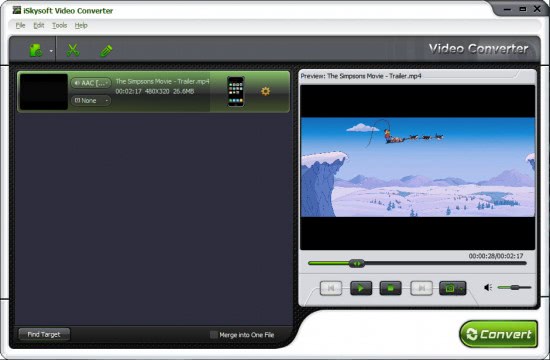 Information about each video that has been added are displayed in its left-pane listing. This includes the video's playtime, resolution and size, but also audio and subtitle information.

Videos can be previewed right away by selecting them first and clicking the play button in the video player on the right pane. The video player offers the usual controls like pausing, using a slider to go back and forth or a volume control.

A click on the output settings icon on the right of the listed videos opens a menu with all available video output options. 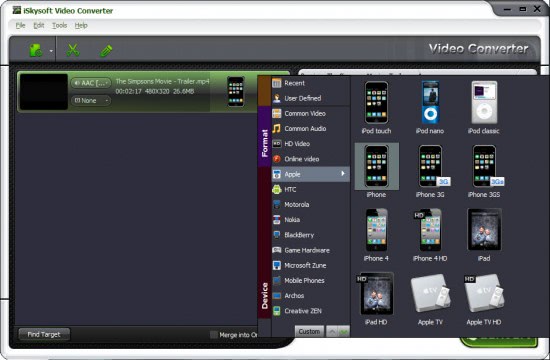 As you can see on the screenshot above there is a lot to chose from. Available are device specific conversions with all popular devices available from Apple devices such as the iPad or iPhone, o Microsoft's Zune, Creative Zen, Game Hardware, Blackberry to HTC and Nokia.

In addition common video formats, online video conversions and custom conversions are offered. It is possible to convert a video into a Youtube HD or Facebook video with ease using the software.

A click on the settings icon next to the selected video output opens an Advanced tab with options to make changes to conversion. Here it is possible to change the audio and video encoder, resolution, sample rate, frame rate or bitrate among other things which can be saved as custom profiles. Users from countries that use PAL and not NTSC need to change the frame rate of the videos manually here if they want to play it on a device that only supports PAL. An option to change the default frame rate would have been handy, but does not seem to be there.

Users can overcome it by creating custom profiles that they then use to convert the files.

A click on Convert converts the video into the selected format. The conversions are speedy, and NVIDIA users with a CUDA compatible video card can make use of the graphics processing unit to speed up the conversion further.

It is furthermore possible to merge the video files into one file which will basically create one video file out of all video files that have been added by the user.

The output format is located in the My Documents folder of the user profile. It can be changed easily in the program options along with the temp directory or the number of cpu cores used for the conversion.

Videos can be clipped and edited before they are processed. This is done by selecting the video in the main program interface and clicking on the Click or Edit buttons afterwards. 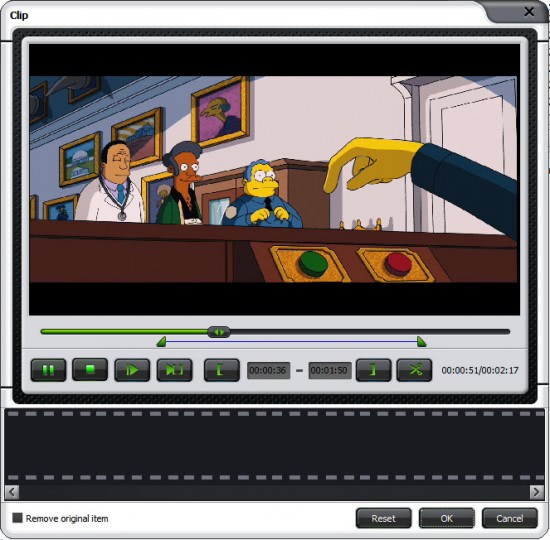 The video editor offers to change several aspects of the video. It is possible to crop it, change the aspect ratio and to add effects, watermarks and subtitles to it. The original video and the edited video are displayed on the same screen with changes being directly visible on the screen. 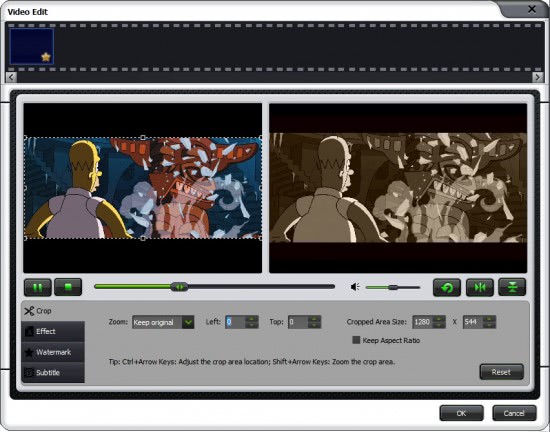 Video Converter for Windows is a handy program for users who need to convert video formats. The program supports all important video formats and a lot of lesser known ones as well. Conversions are very fast, especially with CUDA compatible video cards. The only gripe that I had during the review was that it was not possible to change the default frame rate in the video convert.

All in all it is a fantastic program to convert videos on the Windows operating system.