Many Windows users have at least some files on the computer desktop. I for instance like to place temporary text files on it for fast access. Other users may place program shortcuts on the desktop or other files that they access regularly. The shortcuts and files become inaccessible if a window is on top of them. Microsoft tried to find a comfortable solution for this problem and came up with several options in Windows 7 like Aero Peek, but they all require some sort of interaction and are not really that comfortable to use

Desktop Tray Launcher offers a in many cases better solution. The program scans the computer desktop on start and adds all shortcuts and files to a list. This list is then made available by clicking on the program icon in the Windows system tray so that the shortcuts and files can be accessed even if windows hide the icons on the actual desktop.

A very ingenious and comfortable way of loading files and opening programs on the desktop. 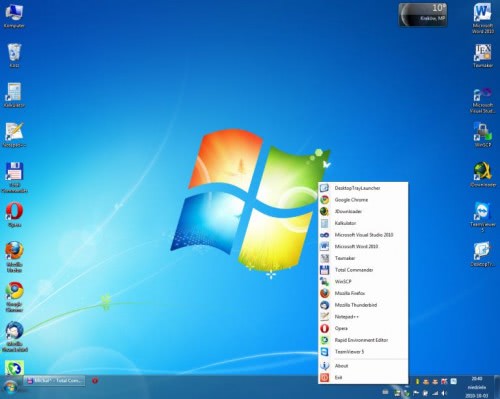 Simply right-click the program icon in the system tray to display a list of all shortcuts and files on the desktop. A left-click on any item in the list will open it right away.

What makes this even more interesting is the fact that it is possible to hide the desktop items without interfering with the program's functionality. Users basically get a clean desktop and still the option to launch the desktop shortcuts easily.

Desktop Tray Launcher will work with all recent versions of the Microsoft operating system, including 32-bit and 64-bit editions of Windows Vista and Windows 7. The program requires the Microsoft .net Framework 4.0, which needs to be installed on the system.

Update: Desktop Tray Launcher 1.5 has been released after more than two years without updates. The new version features a couple of new additions to the program that include:

You can download the latest version of the program from the link listed above.