Ah the good old days. When adventures were hard to crack and players could really die when they made the wrong moves.

Sierra On-line was one of the big dogs of adventuring back then, they produced series like Leisure Suit Larry, Kings Quest, Space Quest and heaps of other remarkable games.

The games are still that popular that fans have created remakes of the games with better graphics and sounds.

But Sarien Studios went a different way. They decided to retain the charm of the classic games by making the original game versions playable in a web browser.

On top of that they added multiplayer support which sounds crazy at first. Ever imagined yourself playing Leisure Suit Larry in the Land of the Lounge Lizards with ten other Larrys? No? Me neither.

While it may sound fun at first, it can become frustrating quickly if the other Larry characters in the game progress to the next stages while you are still standing at start wondering what to do next. Then again, it may also help you solve riddles that you have a hard time cracking.

Sarien Studios have added nine Sierra On-line games so far, including memorable games such as Gold Rush, King's Quest I to III, Police Quest or Space Quest I and II.

All games are hosted on the site and playable in most modern web browsers including Firefox 2 and up, Internet Explorer 6 and up, Google Chrome, Opera and Safari.

Playing the games alone would have been enough fun for some users but the multiplayer addition kicks it up a notch.

You see other players wandering around on the same screen and other parts of the adventure with their input commands displayed as speech bubbles above their characters head. At times, it is a coming and going as if you would be standing in New York Central station.

It is even possible to chat with other players which may be helpful in situations where you are stuck, and those will come, believe me.

Veterans might need a moment to get used to the idea of seeing a dozen clones of their character wandering around in the game shouting commands left and right. Multiplayer can be disabled, helpful if some players do not know their boundaries.

The developers have already announced plans to add new games and features to their adventure gaming project. Next up looks to be King's Quest IV.

If you have some time at hand check it out, it is well worth it. 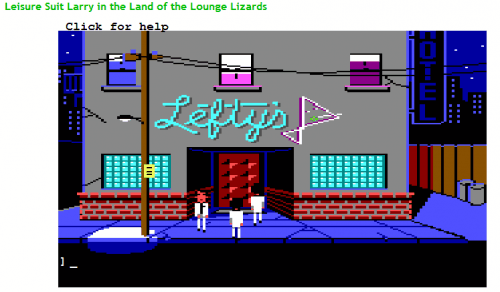