The developer of the lightweight pdf reader Sumatra has released version 1.1 which is available as a direct download from the project homepage. Sumatra is a resource friendly and minimalistic alternative to heavyweight pdf readers like Adobe Reader.

Its minimalistic design and speed make it an ideal pdf reader for users who want work with pdf documents on a regular basis and do not need the advanced functionality that Adobe Reader provides.

Several new features are introduced in Sumatra 1.1 including the ability to export pdf documents to text, new shortcuts for zooming matching Adobe Reader's shortcuts (Ctrl+ and Ctrl-), a send by email option and book view which displays two or even four pages of the pdf document at once. 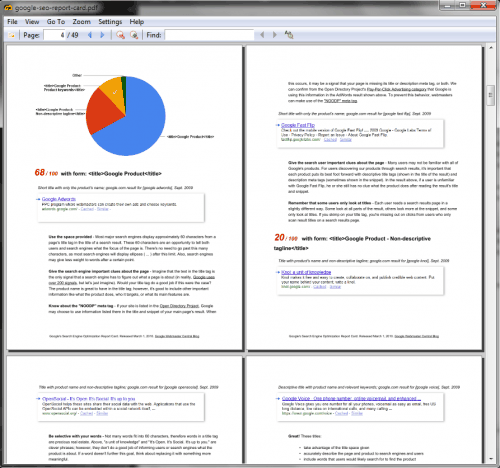 Several bug fixes and smaller improvements have made their way into the new version as well. Sumatra is still one of the fasted loading pdf readers.

Sumatra is not the right pdf reader for users who work with advanced pdf document features. Everyone else might want to take a look to test a faster and more secure pdf reader than Adobe Reader.

Update: Several new versions of Sumatra have been released in the past two years. Changes include support for additional ebook formats like mobi, epub, djvu or xps, a signed installer to avoid issues with security software, improved support for pdf forms or support for opening chm documents from network drives.

The latest version of Sumatra is compatible with all recent versions of the Microsoft Windows operating system. Downloads and the source code are still available on the project website for public download.