Touchpads on laptops running Windows are limited when it comes to finger gestures that the touchpad accepts.

That's unlike touchpads on Mac devices that offer additional possibilities that Windows users until now were not able to use.

Note: The situation improved significantly with the release of Windows 8 and Windows 10. The tool reviewed below may still be useful under certain circumstances, for instance on older devices.

Two Finger Scroll tries to change that by adding new capabilities to Synaptics touchpads. The portable software program just needs to be executed for the new functionality to become available.

Most laptops have Synaptics touchpads which means that Two Finger Scroll should work on most that are sold with Windows.

The software program adds two features to Windows devices with touchpads currently that add new touch actions to the device.

The following two features are supported by the latest program version:

The application places an icon in the Windows System Tray area on startup that indicates that the program is running. You may also use it to change the program's configuration:

A right-click and the selection of Settings from the context menu displays the settings of the software program.

It is here that you may define specific scrolling settings. 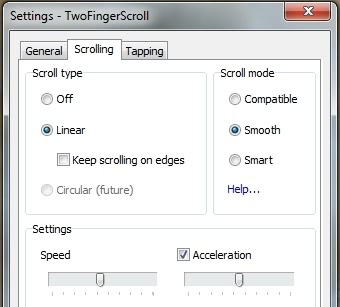 The tapping menu offers additional options to configure tapping related activities. You may map certain tap actions, like tapping with three fingers, to mouse buttons to simulate clicks this way.

Two Finger Scroll adds the functionality to the Windows laptop without installing new drivers for the touchpad. That is its greatest strength. The portable software program can be downloaded from the Codeplex website of the project. (via Lifehacker)