The two processes were WMPSideShowGadget.exe and wmplayer.exe both running on a Windows 7 Professional 64-bit system.

A quick search on the Internet revealed that the WMPSideShowGadget.exe process enables Windows Media Player information to be displayed on Sideshow capable devices.

Windows Sideshow basically transfers information from the PC to another display that can either be integrated into a computer or only remotely linked to it.

The only possible device that could have triggered the WMPSideShowGadget.exe was the Logitech G15 keyboard which uses an LCD display to show information whenever compatible applications are running on the PC. 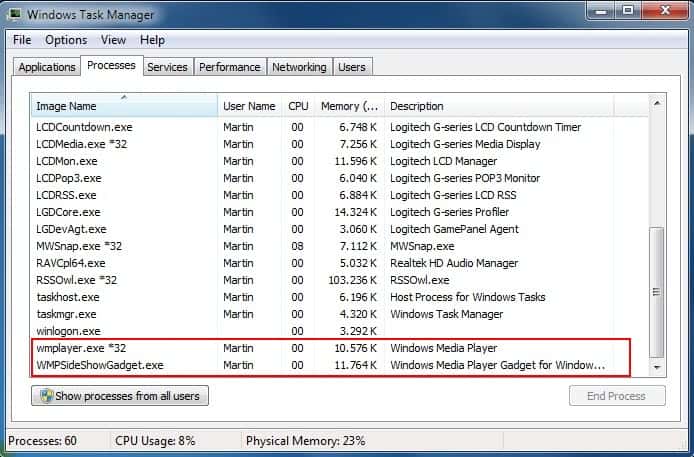 The easiest way to disable WMPSideShowGadget.exe and wmplayer.exe from running is to go into the Windows Control Panel.

Locate Hardware and Sound > Windows SideShow in the Control Panel. This should display a screen that looks like the following.

Uncheck the checkboxes next to the Windows Media Player entry (and every other entry that you do not need). This should immediately kill the two processes which can be checked by pressing Ctrl-Shift-Esc to open the Windows Task Manager.

Logitech G15 users might also want to check the device's settings by opening the Logitech LCD Manager which lists a number of programs that are also automatically started with Windows.

This includes LCD Pop3 Monitor and RSS Reader. All of those applications use computer memory even if they are not being used at all. It is recommended to disable the programs that are not needed to free up computer memory, and to speed up startup time of the operating system. A reboot is required before the changes take effect.

Martin Brinkmann is a journalist from Germany who founded Ghacks Technology News Back in 2005. He is passionate about all things tech and knows the Internet and computers like the back of his hand. You can follow Martin on Facebook or Twitter
View all posts by Martin Brinkmann →
Previous Post: « Configure The 7-Zip Windows Explorer Context Menu
Next Post: How To Move Large Apps Or Games To Another Drive »