If you think radio, you either think of the good old fashioned radio or Internet radio, both with little to no interaction and user contribution.

Jelli tries to change that by offering Internet radio stations that are run by its users. It basically works by allowing users to vote for songs with the most voted songs being played on Jelli.

Signup for the service is unfortunately mandatory.

Users can either link their Jelli account to their Facebook account (with no apparent benefit to the registration process) or register without linking to Facebook. Either way, an email address confirmation link has to be clicked on before it is possible to tune in to the radio stations and start voting for music.

Several radio stations on Jelli have no specific theme which means that the music played can vary highly depending on the users that are tuned in and voting.

Other forms of interaction are provided, including a chat for all users who are tuned in, as well as Facebook and Twitter integration. Jelli users receive a limited amount of rockets and bombs. Rockets can be used to push a song in the positive direction while bombs do the opposite.

The Internet Radio is offered as a m3u file that can be played in most media players. The playback is independent from the website, which means music plays all the time no matter where the user navigates on the website.

Advertisement is played quite frequently which is the only negative aspect of Jelli. Besides that, it offers a unique interesting service that hopefully inspires other services to expand on that. Click here to visit Jelli.

Update: Jelli is no longer available, and the experimental product seems to have been abandoned by its developers. The site the project was hosted on is now an advertising service with no apparent connection to the radio service that was hosted on the domain before.

While I do not know any comparable service that you can try that work in a similar fashion, you may want to head over to Shoutcast instead, a large Internet Radio directory that sorts music by genre and many other ways. You will certainly find music of interest there. 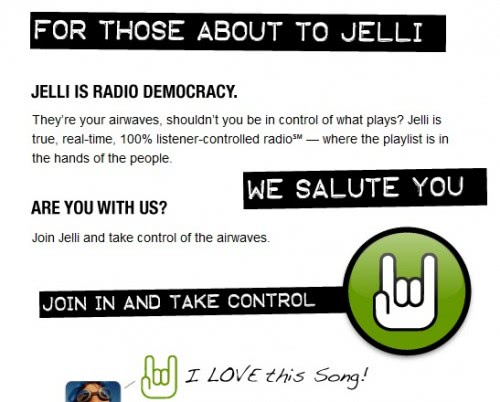