Tweak Me is a free program for Microsoft Windows devices that enables you to make configuration changes to the operating system.

Tweak Me uses a checkbox system that displays the available tweaks in categories like Internet Explorer, Performance, Security or Windows Update.

Expanding a tree will display the configuration tweaks that can be enabled or disabled by clicking in the checkbox.

A click on a configuration item will display a short description in the right sidebar that provides basic information about the function in Windows. 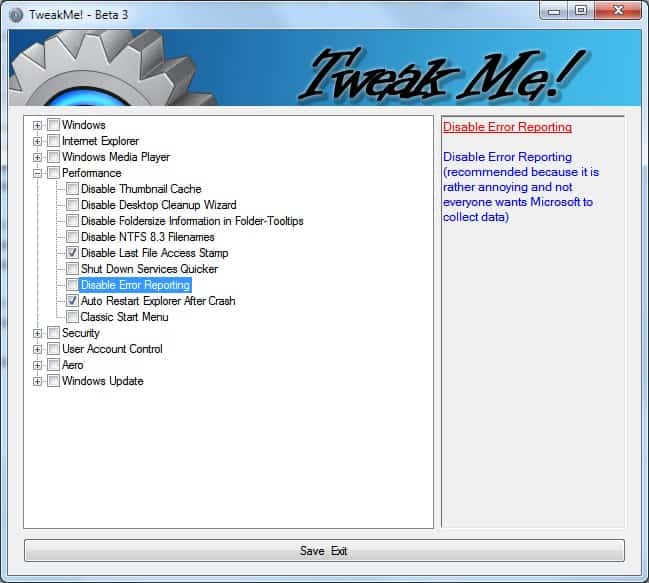 Most of the configuration options are therefore understandable without having to research them further on the Internet or in the help files of the operating system.

The configuration options range from disabling the thumbnail cache over stopping the blacking out of the screen when the User Account Control kicks in, to disabling update checks in Internet Explorer or Windows Media Player.

Tweak Me is compatible with Windows XP, Windows Vista, Windows 7 and Windows 8. Some of the options presented to Windows 7 and 8 users are not available for the other supported operating systems. It has not been tested if the options that should not be available in those operating systems (e.g. UAC in Windows XP) are still displayed by the program.

Windows 10 is not listed as one of the compatible operating system versions, but the program runs fine on Windows 10.

Tweak Me offers a simple and straightforward option to configure many system settings in Windows. Many of the options are difficulty to come by with normal means. The program can be downloaded from the developer's website.

Update: The most recent version of Tweak Me comes with additional tools. You can use it to manage startup items of the operating system, run a system cleaner to remove temporary files, and to manage context menu items in Explorer.

Another change is that tweaks are now color coded. Green indicates safe tweaks, while orange and red that they may have undesirable side effects. The program suggests to create a system restore point on start though, so that you can restore the system to a previous state should the need arise.

Martin Brinkmann is a journalist from Germany who founded Ghacks Technology News Back in 2005. He is passionate about all things tech and knows the Internet and computers like the back of his hand. You can follow Martin on Facebook or Twitter
View all posts by Martin Brinkmann →
Previous Post: « Upload Files To Dropbox By Email
Next Post: Manage NTFS Compression With NTFS Ratio »